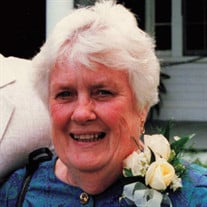 Hampton – Abby Lee Perry, 92, of Hampton, died Thursday, January 6, 2022 at Exeter Hospital after a period of failing health. She was born in Saugus MA July 13, 1929 one of seven children to the late Irving and Emma McLaughlin Cameron. Abby was raised in Saugus and graduated from Saugus High School. She then attended business school in Boston. She moved to Byfield, MA in the 1950’s and then to Newbury, MA before moving to Hampton Falls in 1958. In the 70s she moved to Hampton NH. Abby was involved with the family business with her late husband Walter J. Perry and Perry Concrete where she worked as the bookkeeper and office manager. She later was employed at Liberty Mutual in Portsmouth for 10 years retiring in 1991. She was a communicant of Our Lady of the Miraculous Medal Church and served as a Stephen minister. She also enjoyed knitting and crocheting; making many sweaters, afghans, mittens, blankets for others in family and outside of family. Abby loved to cook and bake. She made many Christmas gifts for others with her baking. Her Apple pies and Pecan rolls were famous. She leaves her daughter Nadine A. Perry and her husband Thomas Wheeler of Hampton Falls, Joyce Perry of Hampton, four grandchildren, Kenneth Dunn, Scott and Justin Lloyd and Natalie Perry as well as 7 great grandchildren, nieces and nephews. A special nephew Robert Perry lived with the Perry family and she wrote many letters to him while he served in Vietnam. She always regarded him and treated him as her son. She was the wife of the late Walter J. Perry Sr. who predeceased her in 2008 and in addition to her parents was predeceased by her son Walter J. Perry, Jr, in 2009 was also predeceased by her daughter Denise Lloyd in 2021 and all her siblings Daniel, Irving, Helen, Eleanor, Betty and Barbara. A mass of Christian burial will be celebrated at 10 A.M., Saturday, May 7, 2022 at Our Lady of the Miraculous Medal Church, 289 Lafayette Road, Hampton. Burial will be in the High Street Cemetery, Hampton. Relatives and friends are respectfully invited. In lieu of traditional remembrances donations may be made to OLMM Church OutReach Program, 289 Lafayette Road, Hampton, NH 03842. Arrangements are by the Remick & Gendron Funeral Home-Crematory, Hampton.

Hampton &#8211; Abby Lee Perry, 92, of Hampton, died Thursday, January 6, 2022 at Exeter Hospital after a period of failing health. She was born in Saugus MA July 13, 1929 one of seven children to the late Irving and Emma McLaughlin Cameron. Abby... View Obituary & Service Information

The family of Abby L. Perry created this Life Tributes page to make it easy to share your memories.