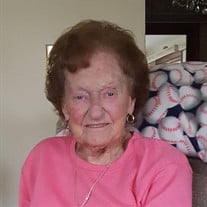 Hampton – Agnes C. Brown, 92, of Hampton, died Thursday, October 11, 2018 at the Exeter Center after a period of failing health. She was born May 28, 1926 in Burlington, VT the daughter of the late Charles and Catherine (LaPrese) Collins. Agnes graduated from Cathedral High School and attended Burlington Business College. She moved to Hampton after her marriage to the late Maurice F. Brown, Jr. She resided here the past 60 years and was a communicant of Our Lady of the Miraculous Medal Church. While raising her family Agnes became employed by Tobey & Merrill Insurance Company. She will be remembered driving around town in her white Sebring convertible with her white West Point cap on, with her favorite canine Welsh Corgi Lady Kara. She was one of the founders of the Hampton Walkers, belonged to the Seacoast Striders, was active with the former Ocean Side Grange #260 and East Rockingham Pomona Grange #11, and was a member of the NH State and National Grange. She was a big fan of the Boston Red Sox, New England Patriots and Army Football and loved attending football games and graduation at Michie Stadium at West Point. Family members include her daughter, Sheree Brown of Exeter, her son, Robert Brown and his wife Teri of Cornwall on Hudson, NY, two grandchildren, Bradley Brown and his wife Stephanie, Patric Brown and his wife Lindsay, two great grandchildren, Robert and Kieran Brown, nieces and nephews. In addition to her husband she was predeceased by her brother Leo Collins. Visiting hours will be from 6-8 P.M. Monday, October 15, 2018 at the Remick & Gendron Funeral Home-Crematory, 811 Lafayette Road, Hampton. Services will be held at 10 A.M. Tuesday, October 16, 2018 in the funeral home with burial following in Central Cemetery, Epping. Relatives and friends are respectfully invited. In lieu of flowers, donations may be made to Shriners Hospital , 2900 Rocky Point Drive, Tampa, FL 33607.

Hampton &#8211; Agnes C. Brown, 92, of Hampton, died Thursday, October 11, 2018 at the Exeter Center after a period of failing health. She was born May 28, 1926 in Burlington, VT the daughter of the late Charles and Catherine (LaPrese) Collins. Agnes... View Obituary & Service Information

The family of Agnes C. Brown created this Life Tributes page to make it easy to share your memories.