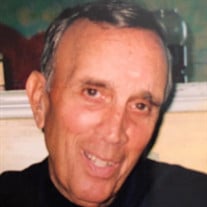 Agostino J. Savastano, Jr. was born on March 21, 1939 in Lawrence, MA, the youngest of 8 children, to the late Agostino J. Sr. and Nicoletta (Indeglia) Savastano, Italian natives and proud Americans. He was educated in the Lawrence School system and, at 17 years old, enlisted in the United States Marine Corps. He was stationed at the Naval Air Station in Miami, Florida, where in 1957, he received a medal for saving a pilot's life. After his honorable discharge from the Marine Corps, Gus went on to have a successful career in Industrial Management that took him across our nation and overseas, most favorably to Ireland and his parents’ native land of Italy. There, he was honored and blessed to meet and enjoy time his Italian relatives. His work career included several years at Raytheon in Andover, MA, Gould-Modecon and as General Manager and Vice President of Hi-G Corporation in Windsor Locks, CT. One of his favorite projects before retiring was as General Contractor for General Railway Signal in Rochester, NY, scouting for land in a helicopter and building two buildings; one for engineering and one for production. Gus' life work nobly included volunteering his time, talent and skills to building homes for Habitat for Humanity and donating his time and attention to homeless shelters and food kitchens and Veterans in need of a listening ear. Upon retiring, Agostino went on to become an award-winning woodcarver. He had amazing artistic ability and, as with everything, paid meticulous attention to detail. Gus thoroughly enjoyed spending time with his family, cooking, fishing, building and fixing any and everything, NY Times crosswords and puzzles, traveling, and playing golf. He always had a project on hand and saw it to completion. He was an avid sports fan, particularly of the Boston Red Sox and the New England Patriots. Gus passed peacefully at home in the arms of his wife, Barbara, on All Saints' Day, November 1, 2018. In addition to his beloved wife Barbara, he is survived by his devoted daughter Nicolle DelliColli of Methuen, his caring step-son Matthew Fardy, his wife Lisa and granddaughter Chloe of New York City, whom he adored and cared for since birth. He also leaves his dear sister, Anna Savastano Lombardi, of Methuen, many special nieces, nephews, grandnieces and grandnephews, dear extended family and great friends. Gus' legacy will surely live on in the lives and hearts of those who admired, respected and loved him so dearly. There will be no calling hours. A Mass of Christian Burial will be celebrated at 12 noon on Saturday, November 24, 2018 at Our Lady of Miraculous Medal Parish, 289 Lafayette Rd., Hampton, NH. Burial will be private. In lieu of flowers, memorial donations may be made to the Disabled American Veterans, online at www.dav.orgdav. Arrangements are by the Remick & Gendron Funeral Home – Crematory, Hampton, NH.

Agostino J. Savastano, Jr. was born on March 21, 1939 in Lawrence, MA, the youngest of 8 children, to the late Agostino J. Sr. and Nicoletta (Indeglia) Savastano, Italian natives and proud Americans. He was educated in the Lawrence School... View Obituary & Service Information

The family of Agostino J. "Gus" Savastano created this Life Tributes page to make it easy to share your memories.

Send flowers to the Savastano family.