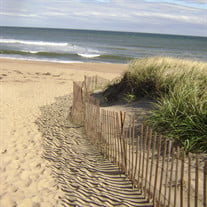 Hampton - Aileen C. (Granger) Janulewicz, passed away peacefully after a lengthy illness at her home on Tuesday, July 4, 2017. She was 74. Born in Worcester, Mass., on July 28, 1942 a daughter of the late Henry A. and Aileen G. (Maher) Granger, she attended local schools and graduated from St. Peter’s High School. From there, Aileen attended Salter Secretarial School which gave her the education to begin a career as a medical secretary for Dr. Stanley Kocot and later at UMass Medical Orthopedic Group. Mrs. Janulewicz loved to spend time at the beach and in 1999, she and Walter made the choice to relocate from their home on Brighton Road, to Hampton where the beach could be their backyard. She leaves behind her loving and caring husband, Walter J. “Chic” Janulewicz, Jr., whom she was married to for 53 years. Besides her beloved husband she leaves behind her son, Stephen P. Janulewicz and his wife, Lisa of Shrewsbury, Mass; three daughters, Teresa J. Janulewicz and her husband, James Sullivan of Hampton, Kathleen A. Murphy and her husband, Daniel of Worcester, Mass., and Patricia M. Janulewicz of Hampton; five grandchildren, Krista, Samantha, Taylor, Haley and Tyler; one great grandson, Jace; many nieces, nephews and extended family members. In addition to her parents, she was predeceased by her daughter, Anne Marie Jacevicius; her brother, Henry F. Granger and her sister Anne Marie Granger. Visiting hours in Hampton will be held on Saturday, July 8th from 2 to 4 PM in the Remick & Gendron Funeral Home - Crematory, 811 Lafayette Rd., Hampton. Visiting hours in Worcester will be held on Sunday, July 9th from 2 to 4 PM in the Callahan, Fay & Caswell Funeral Home, 61 Myrtle St., Worcester. A Mass of Christian Burial will be celebrated at 10:00 AM on Monday, July 10th in Immaculate Conception Church, 353 Grove Street, Worcester. Burial will follow at St. John’s Cemetery. Donations may be made in Aileen's memory to the Merrimack Valley Hospice Home Care, Inc., 360 Merrimack St., #9, Lawrence, MA 01843.

Hampton - Aileen C. (Granger) Janulewicz, passed away peacefully after a lengthy illness at her home on Tuesday, July 4, 2017. She was 74. Born in Worcester, Mass., on July 28, 1942 a daughter of the late Henry A. and Aileen G. (Maher) Granger,... View Obituary & Service Information

The family of Aileen C. Janulewicz created this Life Tributes page to make it easy to share your memories.

Send flowers to the Janulewicz family.