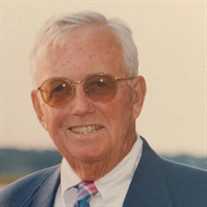 Hampton - Albert John Kurtz, 93, of Hampton and a Seacoast area resident since the early 1960’s, passed away on July 8, 2020 after a lengthy illness. He was born on June 6, 1927, in Boston, MA, the son of the late Albert Beggs Kurtz and Catherine (McDermott) Kurtz. Upon graduating from Newton (MA) High School, he enlisted in the US Army and proudly served in Germany during the Occupation. He graduated from Babson College and started his professional career in manufacturing sales with the Milliken & Company before coming to Exeter to work for Exeter Manufacturing. He left there to start Northern Fiberglass and work with Burlington Industries. At the end of his successful career, he worked as the North American sales representative for Porcher Industries. He shared 61 years of marriage with his late wife, Carol (Claflin) Kurtz who predeceased him earlier this year. He is survived by his daughter, Pamela Kurtz Welch, and her husband, Christopher D. Welch, of Osterville, MA and two grandchildren, Graham D. Welch and Caroline K. Welch, both of New York City. In addition to his parents and wife, he was predeceased by his brother, Francis. Due to the Covid-19 restriction, the Funeral Mass and Burial with Military Honors will be private. The family is grateful to the devoted caretakers at the Compass Memory Care Center at Cornerstone of Hampton for the love, compassion and respect they showed Al during the last year of his life. In lieu of flowers, if desired donations may be made to the Alzheimers Association, 225 N. Michigan Ave., Fl. 17, Chicago, IL 60601.

The family of Albert J. Kurtz created this Life Tributes page to make it easy to share your memories.

Hampton - Albert John Kurtz, 93, of Hampton and a Seacoast area...

Send flowers to the Kurtz family.