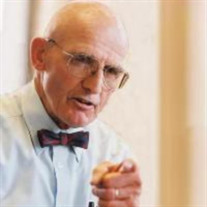 Rye – Dr. Alexander deLahunta, 88, of Rye, passed away peacefully at his home on Tuesday, August 17, 2021, surrounded by loving family. He was born in Concord, NH on December 3, 1932, the son of the late Mary Louise (Alexander) deLahunta. Raised in Concord, he graduated from Phillips Academy Andover, Class of 1951. He went on to graduate from New York State College of Veterinary Medicine in 1958. After two years as a practicing veterinarian at a mixed animal practice in Concord, he returned to the College of Veterinary Medicine at Cornell University in 1960 for graduate study, where he was awarded a PhD in 1963. Dr. deLahunta had a highly successful career as a professor and as a pioneer in veterinary neurology at Cornell University. Throughout his career he received numerous awards and had many accomplishments, one of which was the inaugural recipient of the American College of Veterinary Internal Medicine Lifetime Specialty Achievement Award for the Specialty of Neurology. He would tell you that his greatest accomplishment was teaching the introductory anatomy and embryology courses to the incoming freshman class each year. This allowed him to get to know every student in the class, and they all came to know him as Dr. “D”. He took great pride serving as a mentor to them and many stayed in touch up until his last days. Family was his passion and he enjoyed sharing his love of the outdoors with them. Together they cycled, ran marathons, backpacked in the mountains, skied, played pond hockey, and more. He shared 56 years of marriage with his late wife Patricia (Frink) deLahunta who predeceased him in 2011. Surviving family members include his partner, Shirley Reed Dutton of Maine; children, Scott deLahunta and his partner Eva-Maria Hoerster of Germany, Harry deLahunta and his wife Katie of Utah, Brian deLahunta of New Jersey, Leslie deLahunta Melfi of New Hampshire and 9 grandchildren. All services will be private. In lieu of flowers, donations may be made to the Rye Public Library, c/o Friends of the Rye Public Library, 581 Washington Road, Rye, NH 03870.

Rye &#8211; Dr. Alexander deLahunta, 88, of Rye, passed away peacefully at his home on Tuesday, August 17, 2021, surrounded by loving family. He was born in Concord, NH on December 3, 1932, the son of the late Mary Louise (Alexander) deLahunta. Raised... View Obituary & Service Information

The family of Alexander deLahunta created this Life Tributes page to make it easy to share your memories.

Send flowers to the deLahunta family.