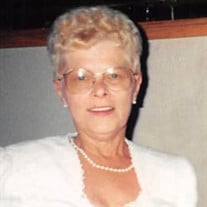 Seabrook - Alexandra "Alice" Sobczak, 85, of Seabrook passed away August 25, 2021 after a lengthy illness. She passed peacefully surrounded by her children. Daughter of Melania "Molly" and Dimitri Oksenuk. From an early age, Alice had a passion for dance. When she was a child, she and her sister Anna joined a professional Russian dance troupe. She would make lifelong friendships, both in and out of the group. Alice could be found dancing in the many polka communities throughout Massachusetts. As long as the band was playing, she would be on the dance floor. As luck would have it, she won tickets to a polka dance where she would meet her future husband, Emil "Dugan" Sobczak. With their combined talents on the dance floor, every step was a show in its own right. Together they would have three children; John, Walter, and Cheryl. Some of her happiest moments were dancing with Walter and Cheryl to The Eastern Sound, a polka band started by John. John's success with the band was a major source of pride for Alice. Walter's dancing was something Alice noted as being so much like Emil's. Alice would then have four grandchildren and even six great-grandchildren who would refer to her as Babcia, meaning "grandmother" in Polish. One of her favorite things to do was to cook Polish and Russian food, be it for small groups of family and friends or sometimes for hundreds of people. Her dishes were the highlight of the holidays and her family and friends would always look forward to those dinners. Her commitment to keeping so many Polish and Russian traditions alive was a passion she proudly shared with everyone each and every day. She is survived by her children, John Sobczak and Cheryl Karinen and her four grandchildren and six great-grandchildren. She was predeceased by the love of her life, Emil Sobczak, her sister Anna Hale, her beloved son Walter Sobczak, and her nephew Joseph Hale. Visiting hours will be from 5 to 7 PM on Thursday, September 2, 2021 in the Remick & Gendron Funeral Home - Crematory, 811 Lafayette Rd., Hampton. In lieu of flowers, the family requests that memorial donations be made to the Boston Children's Hospital, 401 Park Drive, Suite 602, Boston, MA 02215.

Seabrook - Alexandra "Alice" Sobczak, 85, of Seabrook passed away August 25, 2021 after a lengthy illness. She passed peacefully surrounded by her children. Daughter of Melania "Molly" and Dimitri Oksenuk. From an early age, Alice had a passion... View Obituary & Service Information

The family of Alexandra Sobczak created this Life Tributes page to make it easy to share your memories.

Send flowers to the Sobczak family.