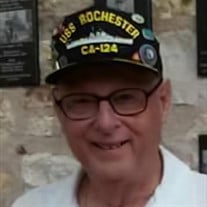 Not sure what to send?

Temple Terrace, FL - Alfred L. Jaques, Jr., 93, a longtime resident of Hampton and Rye, died February 12, 2022, at the Life Path Melech Hospice House in Temple Terrace, Florida. He was born May 28, 1928 in Newburyport, MA, the only son of Alfred L. and Ruth B. (Sprague) Jaques. Alfred graduated from Newburyport High School, Class of 1947, and enlisted in the U.S. Navy shortly after graduation. During his 20 year military career, he proudly served as a YN1, court reporter, on seven ships. His first ship, the USS Rochester, was near and dear to his heart, as his uncle William Binley was the draftsman who designed the ship. Alfred attended USS Rochester reunions every 2 years starting in the 1990's and the last reunion he attended was held in Kansas City, Missouri in September of 2018. After retirement in 1966, he served as the Building Inspector for the town of Hampton, Scoutmaster for the Boy Scouts, Troop 177, and Square Dance caller in Salisbury Beach, MA. Alfred shared 4 years of courtship and 62 years of marriage with his wife, the late Winifred B. (Corliss) Jaques, who predeceased him on June 14, 2012. They were married on June 18, 1950 at the Old South Presbyterian Church in Newburyport, MA. During their storybook marriage, Al and Winnie enjoyed dancing, camping, playing golf, spending quality time with family and friends, and enjoying winters at their home in Ruskin, Florida. Alfred leaves behind two daughters, Cynthia A. Clark and her husband John R. Clark of Rye and Meredith L. Jaques of Ruskin, Florida. In addition to his daughters, he leaves behind three grandsons, Joshua Clark and his wife Kristen of Hampton, Jacob Clark of Hampton and Brendon J. Patrick of Ruskin, Florida and his three great granddaughters, Emma, Maddie, and Natalie. There will be a Celebration of Life for both Alfred and Winifred on Sunday, June 12, 2022 from 1 to 3 pm at the Remick and Gendron Funeral Home. Burial will be private with full military honors in the New Hampshire State Veterans Cemetery. In lieu of traditional remembrances, donations may be made to the Alzheimer's Association or tThe American Heart Association.

Temple Terrace, FL - Alfred L. Jaques, Jr., 93, a longtime resident of Hampton and Rye, died February 12, 2022, at the Life Path Melech Hospice House in Temple Terrace, Florida. He was born May 28, 1928 in Newburyport, MA, the only son of Alfred... View Obituary & Service Information

The family of Alfred Jaques Jr. created this Life Tributes page to make it easy to share your memories.