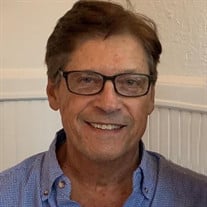 Amesbury, MA - After a courageous battle with cancer, Allan (Al) Wilson, 71, of Amesbury, MA, passed away peacefully at the Kaplan Family Hospice Home on Tuesday, June 15, 2021. Al leaves behind “his girls;” devoted wife, Bonnie and loving daughter, Lauren. He also leaves behind his brother, Robert Wilson and wife Susan of Cranford, NJ, mother and father-in-law, Mary and Robert Spellman of South Yarmouth, MA, and brother and sister-in law Thomas Spellman and Suzanne Vliet of Bourne, MA as well as many nieces, nephews, and dear friends. Al’s zest for life, eclectic taste in music, and kindness touched everyone he met. “Big Al” genuinely cared for and was interested in others. He always wanted to hear about you, rather than talk about himself and could bring the party and laughter wherever he went! Al was born on September 12, 1949 to his proud parents, Robert and Ann Wilson in Elizabeth, NJ. Shortly after graduating from Cranford High School in 1968, he enlisted in the U.S. Navy where he traveled the Mediterranean. Following his honorable discharge in 1971, he continued his travels, which brought him around the world. Al was an amazing storyteller and would often share stories about his adventures over a G&T. Al’s love of music was contagious. He was a percussionist his whole life and you could often find him with his drum sticks at the kitchen counter. Right up until the end, he was able to play weekly at church. When he wasn’t sitting behind a drum set, you could find Al volunteering at Camp Sunshine, working in his beautiful yard, or on the “Capey Beach” with his family. Al proudly worked for SunSetter Awnings for more than a decade. Prior to SunSetter, Al worked for Bose, which tied into his love for music. Visitation will be held from 4 to 7pm on Wednesday, June 23, 2021 in the Remick & Gendron Funeral Home – Crematory, 811 Lafayette Rd., Hampton, NH. A celebration of Al’s life will be held on Thursday, June 24 at 10:30am at Main Street Congregational Church, 145 Main St., Amesbury, MA 01913. In lieu of flowers, the family suggests that donations in his honor be made to Camp Sunshine 35 Acadia Rd., Casco, ME 04015 or to the Music Ministry of Main Street Congregational Church in Amesbury, MA.

The family of Allan Richard Wilson created this Life Tributes page to make it easy to share your memories.

Amesbury, MA - After a courageous battle with cancer, Allan (Al)...