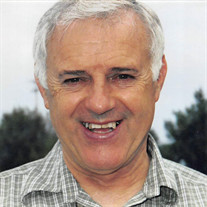 North Hampton – Allen L. Shackley, 76, of North Hampton died peacefully on Wednesday, February 15, 2017 at the Portsmouth Regional Hospital. He was born in Biddeford, ME on November 17, 1940 a son of the late Morris Shackley and Eunice (Grove) Kimball. Raised throughout Maine, he graduated from Casco Bay High School in Portland, ME. Leaving school early, he enlisted in the United States Navy and proudly served 2 years in Milton, FL and 2 years in West Malling, England. Returning home from the Navy, Allen started his 35 years career at IUOE Local 4, retiring in 2003. Allen was a kind hearted and generous man who enjoyed antique cars, airshows and watching his favorite sports teams the Red Sox, Celtics and Patriots. He loved animals, but his greatest joy was spending time with family, especially his grandchildren whom he loved dearly. He was a devoted husband of 54 years to his wife Lorraine (Haskell) Shackley of North Hampton. In addition to his wife, surviving family members include his daughter Dianne Charles and her husband Raymond of Rochester; sisters, Patricia Cushman and her husband Joseph of Mechanic Falls, ME and Susan Snow of Kissimmee, FL; grandchildren, Megan and Ryan Charles; brother in law Kenneth Haskell and his wife Linda of Hampstead and several nieces, nephews and the family cat Jasper. In addition to his parents, he was predeceased by his son Allen L. Shackley Jr who died in 1989 and his brother Morris Shackley Jr. Visiting hours will be from 4 - 7 PM on Friday, February 17, 2017 at the Remick & Gendron Funeral Home-Crematory, Hampton. Services will be held at 11 AM Saturday, February 18, 2017 in the funeral home. Burial will follow in the Center Cemetery, No. Hampton. Relatives and friends are respectfully invited. In lieu of flowers, donations may be made to the New Hampshire SPCA, PO Box 196, Stratham, NH 03885. Please visit www.RemickGendron.com to view Allen’s memorial website, sign his tribute wall or for directions.

North Hampton &#8211; Allen L. Shackley, 76, of North Hampton died peacefully on Wednesday, February 15, 2017 at the Portsmouth Regional Hospital. He was born in Biddeford, ME on November 17, 1940 a son of the late Morris Shackley and Eunice... View Obituary & Service Information

The family of Allen L. Shackley created this Life Tributes page to make it easy to share your memories.

Send flowers to the Shackley family.