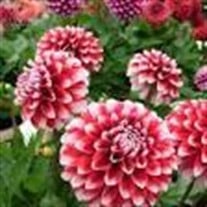 HAMPTON - Anita F. Angelo, 95, of Rye, died Wednesday, September 20, 2017 at Webster at Rye Nursing Home in Rye, NH. Anita was born in Lawrence, MA on July 29, 1922 to the late Santo and Marianna (Augusta) Samperi. She was previously married to the late Salvatore Angelo; and the cherished sister of the late Vito Samperi, Rosario (Chicky) Samperi and Salvatore (Sam) Samperi. Anita worked and retired from the Newburyport, MA school systems where she held assistant and Head Cook positions throughout a prolonged career. She was involved in various community functions associated with the Ladies of Christopher Organization in Newburyport, MA and a devoted parishioner of the Immaculate Conception Catholic Church in Newburyport, MA. After moving to Hampton, NH in 1977, she continued with her volunteer work for the community through Our Lady of the Miraculous Medal Catholic Church in Hampton. She found great satisfaction and purpose in the caring for those less fortunate and gave her time freely to those in need. Her greatest happiness was sharing time with all her relatives and their children: the love for her children, grandchildren and great grandchildren was unconditional and she dedicated herself to them with unselfish devotion and attention to their happiness and comfort. Anita resided at Webster at Rye in Rye, NH since 2005. She was an enthusiastic fan of the New England Patriots and Boston Red Sox and occupied her time listening to music, doing water colors and playing bingo with her friends at Webster. Our beloved is survived by her children: Mary Jane & Stephen (deceased) Pattow , Michael & Pamela (wife) Angelo, Thomas & Frankie (wife) Angelo; Grandchildren: Debbie, Dawn, Melissa, Amy, Jeffrey, Joey and Damon; Great-grandchildren: Derek, Stephanie, Sophia, Zachary, Quinn Thomas, Lilian Rose and Vincenza; Great-great-grandchild, Emma Grace; she is also survived by many loved Nieces and Nephews. A Mass will be celebrated at 12:00 p.m. (Noon) on Monday, September 25, at Our Lady of the Miraculous Medal Catholic Church in Hampton, NH. In lieu of flowers we ask donations be made to Our Lady of the Miraculous Medal Church OutReach Program, 289 Lafayette Road, Hampton, NH 03842.

The family of Anita F. Angelo created this Life Tributes page to make it easy to share your memories.

Send flowers to the Angelo family.