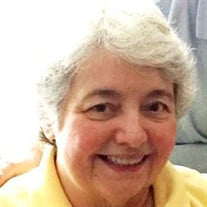 Hampton - Ann Louise Bednar, 69, of Hampton, died February 22, 2017 surrounded by her loving family from complications of a heart attack. Ann was born and raised in Lawrence, Massachusetts, the daughter of the late Louis and Catherine (Clifford) Bruno, and graduated from Saint Mary High School in Lawrence. She continued her education at Trinity University, Washington D.C. majoring in Russian. She later received Master degrees from Boston College and the University of Southern Maine. She had a lifelong interest in deaf education which began in Lawrence. She worked as a Teacher of the Deaf and Hearing impaired in Portsmouth Public Schools for thirteen years. She later had a career as a deaf education consultant, specializing in cochlear implant children, working with Maine and New Hampshire school districts. Ann loved children and teaching children. She also loved watching birds, photography, sewing and knitting for her family and playing the piano. More than anything she loved travelling in the USA and Europe with her husband and children. She is survived by Richard, her husband of 45 years, two daughters, Charlotte of Cambridge, Massachusetts, and Catherine and beloved grandson Desmond of Ipswich, Massachusetts, her brother, Michael Bruno and his wife Susan of York Maine, two nieces, Amanda and Karen. Visiting hours will be from 5-8 P.M. Sunday, February, 26, 2017 in the Remick & Gendron Funeral Home-Crematory, 811 Lafayette Road, Hampton. A mass of Christian burial will be celebrated at 10 A.M. Monday, February 27, 2017 at Our Lady of the Miraculous Medal Church, 289 Lafayette Road, Hampton. Burial will follow in the High Street Cemetery, Hampton. Relatives and friends are respectfully invited. In lieu of flowers, donations may be made to the American Heart Association, P.O. Box 417005, Boston, MA 02241-7005 or go to http://www.heart.org/HEARTORG/

Hampton - Ann Louise Bednar, 69, of Hampton, died February 22, 2017 surrounded by her loving family from complications of a heart attack. Ann was born and raised in Lawrence, Massachusetts, the daughter of the late Louis and Catherine (Clifford)... View Obituary & Service Information

The family of Ann L Bednar created this Life Tributes page to make it easy to share your memories.

Send flowers to the Bednar family.