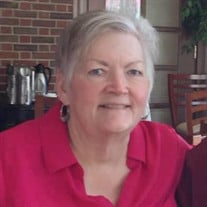 Kensington – Ann Elizabeth “Nancy” Dore Smith, 71, of Kensington, died Monday, August 14, 2017 at her home surrounded by her loving family. She was born in Brooklyn, NY on February 18, 1946, a daughter of the late Lt. Thomas R. and Ann Elizabeth (Stankaitis) Dore. Nancy was raised in Brooklyn and Huntington, NY and graduated from Our Lady of Mercy Academy on Long Island. She received her bachelor’s degree from SUNY Oneonta, Oneonta, NY and her master’s degree from St. John University, Jamaica, NY and served in Zamboanga in the Philippines with the Peace Corps for four years. Mrs. Smith moved to New Hampshire in 1973 and has made her home in Kensington since 1975. She taught social studies at Exeter Area High School for 34 years retiring in 2005. She also taught courses at Franklin Pierce College. She was an active communicant of St. Michael Parish in Exeter, served the town of Kensington as a Trustee of the Trust Funds, was an avid reader of mysteries and was a political junkie. Most important was the passion and love she gave to her family. She shared 45 years of marriage with her husband Thomas V. Smith. In addition to her husband, she leaves her daughter, Elizabeth-Ann “Liz” Ford and her husband Bill of Hampton, her son, Thomas J. Smith and his wife Shawna Wakeham of Williston, VT and their son, Asa Thomas Wakeham-Smith who adored Grandmother “Lola”, her sisters, Barbara Russell and her husband Joseph of Orchard Park, NY, Madelaine Hackett and her husband William of Huntington, NY, several nieces, nephews, her Godsons and her grand dog Tugg. Visiting hours will be from 5-8 P.M. Thursday, August 17, 2017 at the Remick & Gendron Funeral Home-Crematory, 811 Lafayette Road, Hampton. A mass of Christian burial will be celebrated at 11 A.M. Friday, August 18, 2017 at St. Michael Church, corner of Front and Lincoln streets, Exeter. Relatives and friends are respectfully invited. Private interment will be in the Village Cemetery, Kensington at a later date. In lieu of flowers, donations may be made to the Peace Corps Philippines, the Hampton Fire Fighters Charitable Fund, Make-a-Wish Vermont, or the CARE fund for employees of RiverWoods facing hardship, 5 White Oak Drive, Exeter, NH 03833 attn. Kristina Acampora.

The family of Ann Elizabeth Smith created this Life Tributes page to make it easy to share your memories.