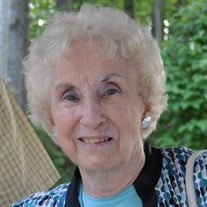 Rye Beach - Anne Patterson Johnson, 90, of Rye Beach, was born, the middle child of five, in Boston, MA to the late John and Sadie (Campbell) Patterson on August 14, 1928, and departed this world peacefully, surrounded by her beloved family at her home on June 20, 2019. Known to her family as Mom, Grandma and Anne, her nine decades on earth were full beyond measure. Early years were made difficult by the loss of her father at age 10 and the hardships of the Depression. Anne worked hard, becoming an accountant and office manager at different companies; her favorite stories involved working at Chance Furniture for many years. She met Edmund E. Johnson, Jr., at her church youth group and they soon began a marriage that would thrive for 57 years. Ed was so proud of Anne and truly loved being her escort through life. Anne adored Ed and missed him dearly after his death in 2013. Theirs was a devoted and loving partnership as they built a house and raised three daughters in Hollis, NH, moving to Rye Beach in 1983. The home on the coast became a treasured place for family gatherings and festive times over many years. Known for her spectacular cakes, elaborate decorations and gift-wrapping finesse, birthdays and holidays were magical and will be remembered with great fondness. Grandma ran a tight ship but her generosity and abundant love for family created a warm and embracing home. Gardening was Anne’s other passion. She and Ed worked many long, hot days to create a large and beautiful yard together. Abundant flowers, birds, deer and turkeys continued to give joy and entertainment through the seasons. Her sharp mind, dry and quick sense of humor and ready smile will be missed dearly. She is survived by daughters Janice Johnson, Susan Beaman (John Beaman), Carole Johnson (Carol Murray); granddaughters Brittany Welton, Gwen Beaman (Jordan Alber), Lauren Ward (Dustin Ward), and great-grandson Bentley Ward. Anne’s family would like to offer a special thank you to the many caring hands of Atlantic Homelife Senior Care. A celebration of Anne’s life will be held at 10 AM on Monday, July 1, 2019 in The United Church of Christ, 295 Atlantic Avenue, North Hampton, NH 03862. Burial will follow at 2 PM in the New Hampshire State Veterans Cemetery, 110 Daniel Webster Highway, Boscawen, NH 03303. Relatives and friends are respectfully invited. In lieu of flowers a donation may be sent to Compassus Hospice, 65 Lafayette Road, Hampton, NH 03862 or Stephen Ministries .

Rye Beach - Anne Patterson Johnson, 90, of Rye Beach, was born, the middle child of five, in Boston, MA to the late John and Sadie (Campbell) Patterson on August 14, 1928, and departed this world peacefully, surrounded by her beloved family... View Obituary & Service Information

The family of Anne P. Johnson created this Life Tributes page to make it easy to share your memories.

Send flowers to the Johnson family.