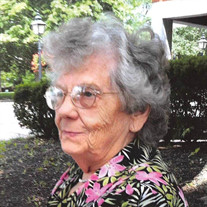 Hampton – Anne C. Kutlowski, 88, of Hampton died peacefully surrounded by her loving family on Friday, November 23, 2018 at Webster at Rye. She was born on October 28, 1930, in Maynard, Massachusetts. Anne is the daughter of the late John and Mildred (Zaniewski) Zaniewski. Anne was the devoted wife of the late Michael A. Kutlowski who predeceased her in 2003. In addition to her parents and husband, she was also predeceased by her son William Kutlowski and her son in law John Haskin. As a young child Anne worked with her father in their family store Quality Market in Maynard where they served the local community with goods from their store. She graduated from Maynard High School in 1949 and Massachusetts General Hospital School of Nursing with the class of 1952. Anne worked as a registered nurse at Mass General Hospital as well as providing specialized care and house calls to patient’s homes. Anne met Michael Kutlowski in September of 1954 on a hayride, and knowing this match was one for life, they soon married on June 25th, 1955 at Saint Casimir Parish in Maynard. Shortly after they relocated to Lynn, Massachusetts to start a family. Together they raised five children and all the while Anne worked as a magazine editor at their family business Tower Press. In 1969 the Kutlowski’s moved to Hampton, New Hampshire and when her last child finished school, Anne went back to work in the Hampton school systems as a substitute nurse. Anne was a communicant of Our Lady of the Miraculous Medal Church in Hampton and was always active in the former Catholic Women’s Club. Anne enjoyed helping provide care and friendship to many of the church community members. Anne was known as someone who was the first to help those in need, or lend a hand to anyone. She was an avid bowler and enjoyed gardening but she was most passionate about hosting large family gatherings at her family home. You could find Anne furiously whipping up a delicious meal for her immediate and extended family by the start of the day, and by the end of the day, she would not have skipped a beat and would be making sure everyone left with full hearts and full stomachs. Anne moved to Webster at Rye in 2017 where she immediately bonded with her friend and roommate Phyllis. Anne especially enjoyed the frequent visits from her family and Sister Doris and Sister Theresa. Family members include her children, Michael Kutlowski and his wife Marie of Maynard, Mass., Mary Haskin and John Kutlowski of Hampton, Edward Kutlowski and his wife Cissy of Hampton; three grandsons, Jimmy, Leo and Joseph; two step granddaughters Tiffany and Heather and two great granddaughters, Emerson and Jessie. The family would like to give our special thanks to the staff at Webster at Rye for the loving care and devotion they provided as Anne’s illness progressed. Visiting hours will be held from 5 - 7PM on Tuesday November 27, 2018 at the Remick & Gendron Funeral Home-Crematory, 811 Lafayette Road, Hampton. A mass of Christian burial will be celebrated at 10 AM on Wednesday, November 28, 2018 at Our Lady of the Miraculous Medal Church, Hampton. Burial will follow in the High Street Cemetery, Hampton. Relatives and friends are respectfully invited. In lieu of flowers, donations may be made to the Alzheimer’s Association or to OLMM Church OutReach Program, 289 Lafayette Road, Hampton, NH 03842.

Hampton &#8211; Anne C. Kutlowski, 88, of Hampton died peacefully surrounded by her loving family on Friday, November 23, 2018 at Webster at Rye. She was born on October 28, 1930, in Maynard, Massachusetts. Anne is the daughter of the late... View Obituary & Service Information

The family of Anne C. Kutlowski created this Life Tributes page to make it easy to share your memories.

Send flowers to the Kutlowski family.