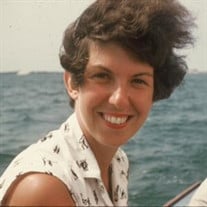 Greenland - Anne H. Taylor, 86, of Greenland and formerly of Hampton, passed away peacefully on Thursday, March 24, 2016 at home surrounded by her devoted husband and loving children. She was born in Braintree, MA on September 16, 1929, a daughter of the late John J. and Mary (Welch) Heffernan. Anne began her college education at Boston University until she met her future husband, Arnet R. Taylor, who spotted her on her sailboat, “Veranshe.” Their brief courtship resulted in 67 years of marriage, seven children, and many more boats. Anne loved the water and taught her children to beachcomb, swim, and sail. She and Arnet spent many summers on Penobscot Bay, traveled down the Intracoastal Waterway and sailed in the Bahamas and Virgin Islands. After raising her seven children, Anne returned to school at age 50 and graduated with honors from UNH with a degree in education. She opened the Taylor School on Drakeside Road in Hampton and taught hundreds of children reading, writing, as well as a love for the outdoors and celebrations with homemade root beer. She continued to share her passion for the outdoors and the sea with her nine grandchildren; she recycled, baked her own bread, grew many of her own vegetables and conserved energy long before it was popular to do so. Anne was an avid sailor, rower, gardener, tennis player, and walker. She built stone walls and was a longtime volunteer as a UNH Marine docent before spending twenty plus years as a volunteer at Sandy Point Science Center, now the Great Bay Discovery Center, in Greenland. For her 80th birthday, she hiked the coast of New Hampshire, from Seabrook to Kittery, ME and continued to walk and exercise until her health diminished. She leaves behind her beloved husband, Arnet Taylor, Sr, her sons Arnet, Peter, Christopher, and Matthew Taylor and her daughters, Gretchen and Ellen Taylor. In addition to her parents, she was predeceased by her son, John “JT” in 2014. Visiting hours will be from 4 to 7 pm on Monday, March 28, 2016 in the Remick & Gendron Funeral Home – Crematory, 811 Lafayette Rd., Hampton. A Mass of Christian Burial will be celebrated on Tuesday at 11 am at the St. Theresa Parish Church, 815 Central Rd., Rye Beach. Family and friends are respectfully invited. Burial will be private. In lieu of flowers, the family suggests memorial donations be made to the Great Bay Discovery Center, 89 Depot Rd, Greenland, NH 03840, online at greatbay.org. Please visit www.RemickGendron.com to view Anne’s memorial website, to sign her tribute wall or for directions.

Greenland - Anne H. Taylor, 86, of Greenland and formerly of Hampton, passed away peacefully on Thursday, March 24, 2016 at home surrounded by her devoted husband and loving children. She was born in Braintree, MA on September 16, 1929, a daughter... View Obituary & Service Information

The family of Anne H. Taylor created this Life Tributes page to make it easy to share your memories.

Send flowers to the Taylor family.