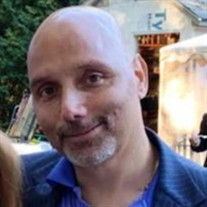 Hampton – Anthony Patrick Guglielmo, Jr., 53, of Hampton, passed away peacefully on Sunday, May 2, 2021 at his home after a 10 year battle with cancer. Anthony was born in Boston, MA on June 24, 1967, the son of Irene (Finocchio) Guglielmo of Hampton and the late Anthony P. Guglielmo, Sr. Anthony shared more than 23 years of marriage with his wife, Karen (McCauley) Guglielmo. Anthony was raised in Wilmington, MA and graduated from Wilmington High with the Class of 1985. He entered the University of Massachusetts at Amherst through the ROTC Program and graduated with his Bachelor’s Degree in Economics in 1990. Anthony moved to Atlanta shortly after and met his wife Karen there. In 1997, after his honorable service with the United States Army, he and Karen were married and eventually settled in Hampton in 2000 to raise their family. Anthony owned and operated a Commercial Mortgage Company in Portsmouth for a few years before returning to his true love of advertising sales. His area of expertise was in movie advertising and he worked for National CineMedia Group until falling ill. Anthony was devoted to his family and many friends that he loved dearly. He was deeply involved with his three son’s many sports teams as they grew up. He coached flag football and basketball for the Hampton Youth Association. Anthony also coached his boys’ basketball teams at Sacred Heart school and for the Journeymen program. He was a faithful communicant of Our Lady of the Miraculous Medal Church in Hampton and was a member of the Knights of Columbus. Anthony was also an active scout leader for the OLMM Boy Scout troop for a number of years. He loved living on the seacoast and enjoying the outdoors. Anthony spent a lot of quality time at Plaice Cove Beach in Hampton with his dog Baxter and his family. In addition to his wife Karen and his mom Irene, Anthony is survived by his sons, Ethan, Roman and Noah – who he was beyond proud of, and his Goldendoodle and best buddy Baxter. He is also survived by his sister, Patrice Lowell and her husband, Michael of Derry, NH and his loving nephews Michael, Justin and Vinny Schuurman. He was also predeceased by his brother Gregory in 1968. Anthony leaves behind an extended family including his beloved Auntie MarySue, Dolly and Annajean, his many Finocchio and Cheffro cousins, his in-laws Jim and Evelyn and all the McCauleys. A Mass of Christian Burial will be celebrated at 1 PM on Saturday, May 15, 2021 at Our Lady of the Miraculous Medal, 289 Lafayette Rd., Hampton. Masks are mandatory and social distancing must be maintained. The Mass will be livestreamed at www.olmmparish.org. In lieu of flowers, memorial donations may be made to a charity of your choice in his name.

The family of Anthony Patrick Guglielmo Jr. created this Life Tributes page to make it easy to share your memories.

Send flowers to the Guglielmo family.