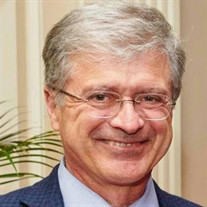 Anthony Charles Janetos died peacefully at home in North Hampton, New Hampshire on August 6, 2019. The cause was pancreatic cancer. He was 64 years old. Tony was the eldest son of five born to Dona and Peter Janetos on November 29, 1954 in Dover, N.H. Tony lived his early life in Durham NH, later moving to Hampton, NH. His childhood was an endless baseball game with his four younger brothers and random neighborhood kids, followed by swimming in the UNH pool. Tony attended Winnacunnet High School, playing soccer, basketball, and baseball, and graduating first in his class in 1971. He earned a Bachelor’s degree magna cum laude from Harvard in 1976 and a Master's and a PhD in biology from Princeton. Tony was a scientist and professor at Boston University at the time of his death. A professional mentor and friend, Thomas E. Lovejoy, described Tony as one of the finest and most thoughtful Global Change scientists. He said Tony was always open to new ideas and eager for constructive ways forward and “one always wanted to know: what would Tony think? Tony’s brilliance and destiny in science were noted early. He had no recollection of being taught to read, which he was doing by age four. He recalled getting his library card as one of the most significant events of his early childhood. Scientific discovery also began early at eight years old, when he was caught toying with a goldfish on mom Dona’s ironing board. When asked what he was doing, he nonchalantly said he wanted to figure out how it worked. Fast-forwarding to adulthood, Tony’s research contributions began with the foraging habits of orb-weaving spiders, a paper still cited by scientists in that field. This work foreshadowed a lifelong interest in how living creatures- especially people- make important decisions about their future. After a post-doc at Harvard that honed skills in communicating science to decision-makers, Tony moved with future wife Valerie (whom he met playing softball in Boston) to the DC area where they lived and worked for thirty years and raised their family. Over much of the 1980’s, Tony examined his interest in humans’ impact on the natural world through the lens of air pollution, beginning at EPA with its acid rain program. This led naturally towards work on climate change, landscape dynamics, and remote sensing, including eight years as a manager and team leader with NASA founding its Land-Cover and Land-Use Change Program. Now an expert on science and policy more broadly, as well as an accomplished project manager, Tony spent the next fifteen years as an international leader in climate change science, science policy, and global environmental assessments. He advised the UN, worked on IPCC reports, and served at the Heinz Center for Science, Economics, and the Environment, the World Resources Institute, and the Joint Global Change Research Institute at the University of Maryland where he was Director. In 2013, Tony had the opportunity to move back to his native New England to become the Director of the Pardee Center for the Study of the Longer- Range Future at Boston University and Professor in BU’s College of Arts & Sciences and Chair of the Earth and Environment Department. He helped put BU in the vanguard of universities acting to mitigate the impacts of climate change as Chair of its Climate Action Plan Task Force. BU President Bob Brown recognized in a letter to faculty that “Tony was (and will ever be remembered as such) vital, energetic, engaged and intelligent” and that “in only a few short years with us, he had an enormous impact.” Tony was involved with many scientific societies throughout his career, and held leadership roles in several national and international climate change study groups such as the National Climate Assessment. He wrote and spoke widely on the scientific, environmental, economic, and policy linkages among major global environmental issues, in particular climate change. He was an exceptional communicator to a wide variety of audiences, most recently invited to educate meteorologists on this topic. A close colleague and friend at BU remembers Tony as a modest, loving man, and great fun to be with. He relished life and showered caring and love on his students, family, and friends. His four brothers saw how many friends he made, and even more impressively, kept them. A sister-in-law offered her own high praise: “Tony was a good egg.” Tony was a great Dad, an excellent uncle to his many nieces and nephews, a dedicated coach of youth sports in Arlington, VA, and a positive influence on all he came in contact with. He was a devoted and kind husband to his wife of 34 years, Valerie Gamache. They shared a love of travel, the NH coastline, books, Scrabble, pets, softball and baseball and long distance running. Tony was a lifetime Red Sox fan and relished his own summers getting up to the plate and out in centerfield, most recently in “an old man’s league” in Boston. Tony will be terribly missed by wife Valerie, his children Anna and Peter, brothers Jim (wife Dale Pollack) and Steve (Susan) in NH, John (Liz Watkins) and Greg (Rahel Crowley) in CA, sister-in-law Lisa Brideau (husband Mark), uncles Ron Reagan (Jane) and Jerry Reagan, aunt Amy Ebner, many nieces, nephews, cousins, two dogs, five cats, and countless friends and colleagues throughout the worldwide scientific community. Services will be private. For more on Tony’s contributions to BU and science, view www.bu.edu/articles/2019/anthony-janetos-obituary/ .

Anthony Charles Janetos died peacefully at home in North Hampton, New Hampshire on August 6, 2019. The cause was pancreatic cancer. He was 64 years old. Tony was the eldest son of five born to Dona and Peter Janetos on November 29, 1954 in... View Obituary & Service Information

The family of Anthony C. Janetos created this Life Tributes page to make it easy to share your memories.

Send flowers to the Janetos family.