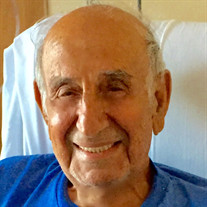 Seabrook – Aristotle “Ted” Markos, 89, of Seabrook, passed away peacefully on Tuesday, October 16, 2018 at Holy Family Hospital in Methuen. Ted was born in Newburyport, MA on March 31, 1929, the youngest son of the late Athanasios and Chrisafo (Giourdas) Markos. He was raised in Newburyport and enlisted in the United States Navy at an early age. Ted married the love of his life, the late Carol F. “Molly” (Randall) Markos in 1955 and they had lived in Salisbury, MA and Newburyport before relocating to Seabrook in the 1960s. Ted’s naval career took him around the globe and he was eventually assigned as a prison guard at the Portsmouth Naval Prison where he retired from the Navy in 1972. After leaving the Navy, Ted became a sergeant in the Seabrook Police Department and after retiring from there, he became Director of Security at the former Yankee Greyhound Park and also co-owned "The Point" restaurant in Seabrook. Ted was a member of the Annunciation Greek Orthodox Church in Newburyport, the Logganiko Society of Ipswich, Elks Lodge #60 of Newburyport, the Raymond E. Walton American Legion Post 70 of Seabrook, a member of St. James Lodge #102 F. & A. M. of Hampton, Scottish Rite Bodies Valley of Portsmouth and Dover and a member of the Bektash Temple Shrine. Ted and his wife spent many winters in Barefoot Bay, Florida and loved to shop the yard sales, especially furniture, and would haul his treasures back up to MA where he would refinish them and sell or give away to family and friends. His favorite beverage was coffee and he was known for drinking 4-6 cups a day followed by one or 2 TableTalk lemon pies. He loved to joke and tease and always had a quick smile and laugh. Family was always important to him and he was always quick to offer his assistance to anyone in need. He will be sadly missed. Ted is survived by his daughter, Billie Therrien of Phoenix, AZ and his niece and caregiver, Tina Papadopoulos and her partner, Robert Messier of Marlborough, MA. Step-daughter Debra Jean Perkins of Seabrook, step-grandchildren Faye Perkins, Christine George and Leonard Perkins, Jr., several step-great grandchildren as well as many nieces and nephews. In addition to his beloved Molly who passed in January 2017, Ted was predeceased by his brothers, Lambros, Apostolos, Chris (Ethel), George (Isabel), Sam (Dorothy), William (Mina), Frank, and Tony Markos, and sister Anastasia (Perry) Papadopoulos, nieces Delores and Andrea Markos, and Dottie Cross, and nephews Arthur T. and Arthur C Markos. Visiting hours will be from 4 to 7 PM with a Trisagion Service at 4 PM on Sunday, October 21, 2018 in the Remick & Gendron Funeral Home-Crematory, 811 Lafayette Road, Hampton. A Funeral Service will be celebrated at 11AM on Monday, October 22, 2018 in the Annunciation Greek Orthodox Church, 7 Harris St., Newburyport, MA 01950. Burial will follow in the Hillside Cemetery, Seabrook. In lieu of flowers, memorial donations may be made to the Mortgage Account -Annunciation Greek Orthodox Church – Newburyport at the above address.

The family of Aristotle "Ted" Markos created this Life Tributes page to make it easy to share your memories.

Send flowers to the Markos family.