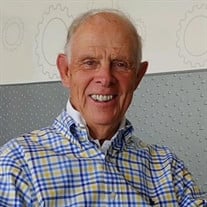 Rye - Arnold Vaughan Sanborn, 81, of Rye, NH, passed away peacefully on October 3, 2021. He was born in Washington D.C., December 30, 1939 son to the late Gertrude (Nares) and Arnold Foster Sanborn. Vaughan, a Mayflower Descendant, was raised in Wilton, Maine and graduated from Wilton Academy in 1958. He graduated with a BS in Education from the University of Maine in 1964. Received his MBA in Finance from Northeastern University in 1979, and completed course work at Suffolk University Law School. After a brief period as a math, science and English teacher, Vaughan joined the Liberty Mutual Group where he remained for 40 years in several administration executive management roles such as HR, Finance, and Procurement in both their Portsmouth office and Boston Corporate Headquarters. Vaughan participated in numerous civic activities after his move from Andover to Rye in 1979. He served on the Board of Directors and as Chairman of the Board for the Greater Portsmouth Chamber of Commerce. Similarly, he served on the boards of the Greater Seacoast United Way, the UNH Whittemore School Executive Board, and the United Ways of New England. He was a member of Abenaqui Country Club and the Portsmouth Yacht Club. Vaughan enjoyed downhill and cross country skiing; playing golf literally as often as possible; and dancing whenever and wherever he heard a good beat. He was a regular visitor to the gym, but only to ensure he could continue to enjoy his specialty; a perfectly cooked streak in his farmhouse fireplace with a dessert of vanilla ice cream smothered in chocolate sauce. Most of all he liked making friends—as well as strangers—laugh. He had a marvelous sense of humor. In addition to his wife of 26 years, Elizabeth, Vaughan is survived by his son Daren Sanborn, daughter-in-law Heidi Sanborn, and granddaughter Marin Vaughan Sanborn of Peoria, AZ; daughter Julie Vaughan Knight, son-in-law Derek Knight, and grandsons Cayden and Colby Knight of Epping, NH; daughter Elizabeth Townsend of South Portland, ME. When his kids were young, Vaughan loved coaching their youth sports. Vaughan was very proud of his children and grandchildren. He believed that each of them an individual - smart, curious, and talented. He never shied away from telling people their accomplishments. Sitting on his deck or by his fireplace at home with Elizabeth, his loyal dog Logan, a glass of wine in hand and toasting the people he loved sums up the picture. He would want you to raise a glass in remembrance of him. Cheers to a loving husband, father, and friend. The disease may have taken away his cognitive abilities, but not his exuberance for life even at the end. The family wish to extend a “Thank you” to Bellamy Fields Assisted Living in Dover for the wonderful, loving, and compassionate care and to Cornerstone VNA and Hospice for all their support. Vaughan will be laid to rest in a private ceremony in the Rye Central Cemetery. A "Celebration of Life" will be held at Abenaqui Country Club on Thursday, October 14th from 3:30 – 5:30 pm. In lieu of flowers, donations may be made to your local United Way.

The family of Arnold Vaughan Sanborn created this Life Tributes page to make it easy to share your memories.

Send flowers to the Sanborn family.