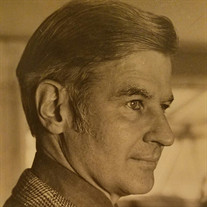 North Hampton - Arthur James Cain, 93, of North Hampton, NH, passed away at his home where he lived with family for 15 years on December 29, 2016, surrounded by his family and loved ones. Born in Lynn, MA on January 10, 1923. Preceded in death by parents Albert and Margaret Cain, and siblings Marguerite, Charles, George, and Edward Cain. In 1948 Arthur married Ruth Elizabeth Osterberg, born September 14, 1924. Together they shared a long, happy life together for 65 years before she passed away at home on September 4, 2014. Ruth was a Phi Beta Kappa graduate working as a social worker and mental health therapist. Arthur was a devoted father of Bruce Cain and wife Jody Foster, Stephen Cain and wife Elizabeth, Lawrence Cain and wife Robin, Barbara Garces and husband Luis. Survived by grandchildren, Lisa Bezeredi and husband Scott, Timothy Cain and wife Brenda, Jessica Jensen and husband Sean, Deborah LaBrecque and husband Michael; Jeffrey Cain and fianceé Abby Siemasko, and Julie Garcés, Andrew, Douglas, and Christopher Cain; and by great grandchildren, Adrianna and Audrey LeBrecque, Joseph and Thomas Bezeredi, Sophie and Lucy Jensen and several nieces and nephews. Arthur graduated from Lynn English High School in 1940 as co valedictorian of his graduating class and a medal-winning athlete. He graduated Phi Beta Kappa from Boston University in 1944, and served with the US Navy during WWII. He completed Midshipmen School in 1944, served as Lieutenant Junior Grade in the U.S. Naval Reserve, and participated in two invasions in the Pacific. Upon his return, he entered Harvard Medical School, graduated in 1951 and obtained his medical license in 1952. In 1959 he received a certificate from the American Board of Psychiatry and Neurology Psychiatry, and in 1962 he became a member of the Boston Psychoanalytic Society and Institute. Following training and licensing by the American Psychoanalytic Association in 1964, Arthur worked for nearly 40 years as a psychiatrist and Director of Psychiatric Services at McLean Hospital in Belmont MA, which is known for ground-breaking neuroscience research. He also had a private psychiatric practice, and was a long time member of the Boston Psychoanalytic Society and Institute and the American Psychiatric Association. In 1988 he became a Life Member of the American Psychiatric Association (50 year Award). During his long life, Arthur lived many places in Massachusetts, including Lynn, Cambridge, Belmont, Newton, Waban, Arlington and Bedford. He and Ruth had a second home in Naples, Florida, and a summer home on Beech Island on Bow Lake, New Hampshire. They moved from Bedford to North Hampton, NH to live with family in 2003. Arthur had many interests in addition to neuroscience. He loved to converse with people, and such conversations often took interesting turns befitting only a psychiatrist. He loved to swim in the ocean and lake. He played tennis for years, and built a tennis court in the backyard at Newton, MA that became a popular neighborhood attraction. Arthur was an avid reader of books and newspapers. In his later days, he could often be found embracing his tablet computer scouring current events. He was a fan of foreign films with no apparent fear of subtitles. He loved to play Scrabble with relentless style, especially with his granddaughter Julie. He loved to visit the Boston Symphony Orchestra, and listened to volumes of recorded classical music at home at remarkably high volumes. He and his wife Ruth shared a passion for music that ranged from classical opera to Broadway show tunes, and they sang together in a local choral group. In later years, the family often witnessed them singing together at home. They enjoyed travel, and went to Europe and Greece after they retired. They often visited the family summer lodge on Beech Island at Bow Lake, NH, which remains a beloved family gathering place to this day. Visiting hours for family and friends was held on Friday December 30, 2016 at the family home in North Hampton, NH. A memorial service will be held later in 2017, when Arthur’s ashes will be spread at the Bow Lake NH property alongside Ruth, whose ashes were spread there in the autumn of 2014.

North Hampton - Arthur James Cain, 93, of North Hampton, NH, passed away at his home where he lived with family for 15 years on December 29, 2016, surrounded by his family and loved ones. Born in Lynn, MA on January 10, 1923. Preceded in death... View Obituary & Service Information

The family of Arthur J. Cain created this Life Tributes page to make it easy to share your memories.