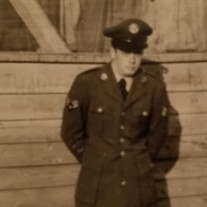 Portsmouth – Arthur H. “Ice Cream” Hanscom, Jr., 88, of Portsmouth, passed away peacefully on Thursday, January 3, 2019 at Portsmouth Hospital. He was born in Portsmouth, February 9, 1930 the son of the late Arthur H. and Margaret (Thompson) Hanscom. Arthur was raised in Greenland and graduated from Portsmouth High School. He was a Korean War veteran serving with the US Air Force. He was employed by Portsmouth Department of Public Works retiring in 1998 with 28 years of service. Prior to this he worked as a school bus driver and as a driver for local city transport in Portsmouth. Arthur also enjoyed landscape work and mowed lawns for his many customers in the area. He shared 60 years of marriage with his wife Betty J. (Mitrook) Hanscom. In addition to his wife, family members include seven children: Donna Clark (John), Nancy Hanscom, John Hanscom (Betty), Carol Hanscom, Maurice Hanscom, Sandra Hanscom (Thomas Medeiros) and Wanda Hanscom; his sister, Mary Mayhew; his six grandchildren: Melissa, Eddie, Tommy, Nick, J.J. and Alex as well as several nieces and nephews. He was predeceased by his great granddaughter, Miranda. A graveside service will be held at 1 PM on Thursday, January 10, 2019 at the NH State Veterans Cemetery, 110 Daniel Webster Hwy, Boscawen, NH 03303. Check back for service dates and times. In lieu of flowers, memorial donations may be made to the NH SPCA, 104 Portsmouth Ave., Stratham, NH 03885.

The family of Arthur H. Hanscom Jr. created this Life Tributes page to make it easy to share your memories.

Send flowers to the Hanscom family.