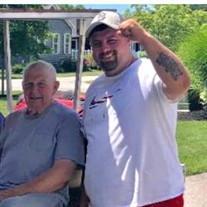 North Hampton – Arthur “Bunky” Lewis, 81, of North Hampton since 2011, formerly of Danvers, MA, died peacefully on Friday, August 2, 2019 at his home. He was born in Salem, MA on July 1, 1938 a son of the late Arthur L. and Gertrude E. (Sweeney) Lewis. Raised in Danvers, MA he attended the former Holten High School before leaving early and enlisting in the United States Navy, where he proudly served for 4 years. Bunky worked for Fairview Machine Company in Topsfield for over 30 years, retiring in 2010. He coached for many years in both Danvers Little League and Danvers Youth Hockey. Bunky liked to stay busy and could often be seen driving his golf cart throughout his community and was always willing to lend a helping hand. Surviving family members include his wife of 60 years Karen (Pivonski) Lewis of North Hampton; children, Kerry Lewis and his wife Shannon of Seabrook, Robin Farrell of Danvers, MA and Todd Lewis of Fuquay Varina, NC; brother, Robert Lewis and his wife Rita of Wilmington, MA and grandson, Derek Farrell of Danvers, MA. In addition to his parents, he was predeceased by his grandson, Dustin Farrell. At Bunky’s request there will be no services. In lieu of flowers donations may be made in his name to the New Hampshire SPCA, PO Box 196, Stratham, NH 03885.

The family of Arthur "Bunky" Lewis created this Life Tributes page to make it easy to share your memories.

Send flowers to the Lewis family.