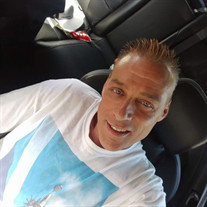 Seabrook – Arthur C. “Buster” Wilson, IV, 51, of Seabrook and formerly of the Boston, MA area, passed away peacefully on Thursday, October 8, 2020 at the Exeter Hospital after an extended illness. He was born in Exeter, NH on March 29, 1969, the only son of Arthur C. Wilson, III, of Seabrook and the late Barbara A. (Frascone) Wilson who died in 2008. Buster was raised in Seabrook and attended Winnacunnet High School. He was always a fun-loving guy and loved his family and friends above everything else in the world. He was especially close to his sisters and they enjoyed many laughs together. Buster loved to eat and was a great cook. He enjoyed hosting get-togethers and preparing big meals for his family and many friends. He worked for many years in Boston as a vendor at the North End Feasts and with Ippolito’s Snow Services. He was a member of the Sons of American Legion Post 70 in Seabrook, enjoyed Keno, gambling with the pull tabs and socializing with the other members. In addition to his father, family members include his five sisters, Pamela Randall and her husband Herbert, Lisa Roberts and her husband Derrick, Luannah Wilson and her husband Peter, Deidra Wilson and Kimberly Wilson, all of Seabrook, his Aunt Donna Frascone Perkins and Uncle Charles Frascone, both of Salisbury and several nieces, nephews and cousins and many dear friends. Buster will also be missed by many of his friend’s children who referred to him as their uncle. A graveside service will be held at 11 AM on Thursday, October 15, 2020 in the Hillside Cemetery, Seabrook. Masks are required and social distancing must be maintained.

The family of Arthur C. "Buster" Wilson IV created this Life Tributes page to make it easy to share your memories.