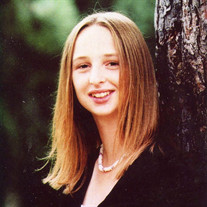 Dover – Ashley Elizabeth McLaren, 22, of Dover and formerly of Exeter, died suddenly on Sunday, February 28, 2016 at the Wentworth-Douglass Hospital in Dover. She was born on August 26, 1993 in Exeter, the daughter of Tobey J. McLaren of Hampton and the late Sharon Pearson. Ashley was an outgoing, kind-hearted, conscientious and courteous young lady. She was raised in Exeter and graduated from Exeter High School with the Class of 2011 where she was an honor roll student and an outstanding athlete, playing for the school ice hockey and softball teams. She also loved to ski and was an avid skateboarder. Ashely became very involved in the many help groups, programs and meetings she attended. She spoke often at these gatherings and organized many functions and events to assist others in their time of need. She had a natural ability to make everyone around her smile, had a huge heart and would always put other’s needs before her own. In addition to her father, Ashley leaves her siblings, John Studley of Boston, Tobey McLaren, Jr. of Exeter, Kaitlyn Studley of Malden, MA and Bonnie and Hannah Matsubara of Newburyport MA. She also leaves her grandmothers, Claudette McLaren of Hampton and Geraldine Pearson of Peabody, MA and several aunts, uncles, nieces, nephews, cousins and friends. Ashley loved her family and friends and they loved her tremendously, she will be sadly missed. She was predeceased by her mother, Sharon Pearson who died in 1999 and her grandfathers, Thomas McLaren and Maurice Pearson. Visiting hours will be from 4 to 7 pm on Friday, March 11, 2016 in the Remick & Gendron Funeral Home – Crematory, 811 Lafayette Rd., Hampton. A Celebration of Life Service will be held on Saturday at 2 pm in the funeral home. Family and friends are respectfully invited. Burial will be private. In lieu of flowers, donations may be made to the Southeastern NH Services Foundation, 272 County Farm Rd., Dover, NH 03820

Dover &#8211; Ashley Elizabeth McLaren, 22, of Dover and formerly of Exeter, died suddenly on Sunday, February 28, 2016 at the Wentworth-Douglass Hospital in Dover. She was born on August 26, 1993 in Exeter, the daughter of Tobey J. McLaren... View Obituary & Service Information

The family of Ashley Elizabeth McLaren created this Life Tributes page to make it easy to share your memories.

Dover – Ashley Elizabeth McLaren, 22, of Dover and formerly of...

Send flowers to the McLaren family.