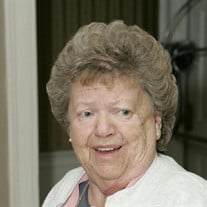 Hampton – Barbara J. Bowen, 84, of Hampton, died Thursday, May 26, 2016 at Portsmouth Regional Hospital surrounded by her loving family. She was the wife of the late Elwood W. “Bill” Bowen who predeceased her in 1997 with whom she shared 45 years of marriage. Barbara was born November 25, 1931 in Reading, Mass., the daughter of the late Harold and Elvie (Hardy) Johnson and graduated from Reading High School with the Class of 1949 where she was known as “Barbara the Girl” with the pocketful of smiles. She and her late husband, managed Hemlock Haven and the 4 Seasons Mobile Home Park for many years, and even after his death she continued to manage them until her illness 2 1/2 years ago. Prior to this she worked in the cafeteria at Winnacunnet High School and the Dondero Elementary School in Portsmouth while raising her family. She also packed apples for Romac Orchards in Acton, ME. She was a 60 year member of the Order of Eastern Star in Sanford, ME. Family members include three children, William Bowen and his wife Alice, Cheryl Oiler and her husband Michael, Sandra Johnson and husband George, three grandchildren, Erika Bogacz and her husband Matthew, Jessica Ross and her husband Scott and Brad Johnson; she is also survived by two great grandchildren, Michael Bogacz and Kendall Ross who were the light of her life. The family would like to thank the staff at Portsmouth Hospital, Oceanside Skilled Nursing & Rehabilitation and Clipper Harbor for the care she received in the past 2 ½ years. A graveside service will be held at 11 A.M. Saturday, June 4, 2016 in the High Street Cemetery. Relatives and friends are respectfully invited. In lieu of flowers, donations may be made to the NH S.P.C.A., P.O. Box 196, Stratham, NH 03885 or to the American Heart Association/ American Stroke Association, PO Box 417005 Boston, MA 02241-7005 or go to www.heart.org.

The family of Barbara J. Bowen created this Life Tributes page to make it easy to share your memories.

Send flowers to the Bowen family.