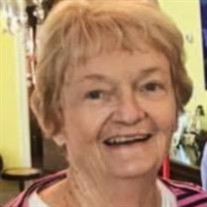 Exeter, NH - Barbara A. Caswell, 80, a resident of Riverwoods in Exeter, passed away peacefully on Tuesday, January 5, 2021 after a period of failing health. Barbara was born In Lawrence, MA on August 30, 1940 to Charles and Edmee Bradley. She grew up in Andover, MA and attended Abbott Academy, graduating with the class of 1957. She was then accepted and attended Manhattanville College in New York, graduating with the class of 1961. Barbara was the wife of Paul H. Caswell, who predeceased her in 2009. She leaves behind two sons, Paul B. Caswell of Annapolis, MD, Dr. Philip Caswell and his wife Rupal of Sparta NJ., her daughter Carolyn Heinen and her husband Joseph of Sudbury MA, and five grandchildren including Yasmeen, Dillon and Jaisen Caswell and Nate and Zoe Heinen. She is also survived by her brother Robert Bradley of Boston, MA and predeceased by brothers Charles E. Bradley of Darien, CT and William Bradley of Fort Meyers, FL. Upon her graduation from college, she spent time working in the hospitality industry in St. Thomas in the Caribbean. She moved back to New York City a few years later taking a position as an administrative assistant with NBC at 30 Rockefeller Plaza. Later, she met and married her husband Paul and moved to Darien, CT to raise her three children. During her time in Darien she became active in education serving on the board of education and eventually as its President. When Paul retired in 1992, they settled in Rye Beach, and spent winters in Savannah Georgia until they moved to Vero Beach, FL residing at The Grand Harbor Golf and Beach Club. During her retirement years Barbara was an avid golfer and active in the Rye community volunteering with the Rye Library, Rye Garden Club and also supported the A.S.P.C.A. A devout catholic, she was a communicant of St. Theresa Church in Rye Beach. One of her biggest passions during retirement was painting pictures of the beach and other beautiful scenes in the area. She also loved to travel and spend time at the beach with her friends and family at the Rye Beach Club. A memorial mass will be celebrated at 11 A.M. Saturday, January 16th at St. Theresa Church, 815 Central Road, Rye Beach. Relatives and friends are welcome. To view live stream go to https://www.sainttheresachurchrye.org/ A private burial for the family members will be held at Central Cemetery Rye. In lieu of traditional remembrances donations may be made to The Alzheimers Association Arrangements are by the Remick & Gendron Funeral Home and Crematory, Hampton.

Exeter, NH - Barbara A. Caswell, 80, a resident of Riverwoods in Exeter, passed away peacefully on Tuesday, January 5, 2021 after a period of failing health. Barbara was born In Lawrence, MA on August 30, 1940 to Charles and Edmee Bradley.... View Obituary & Service Information

The family of Barbara A. Caswell created this Life Tributes page to make it easy to share your memories.

Send flowers to the Caswell family.