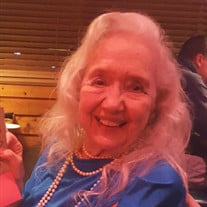 Brentwood - Barbara Oakley Hayes entered heaven’s ballroom on May 17, 2021 where she will eternally be dancing the Tennessee Waltz. Barbara was born on January 14, 1927 and raised in Oakdale, Tennessee. Barbara left the hills of Tennessee for Dayton Art Institute where she met her future husband, Maj. Herman Hayes, who was serving in the US Air Force at Wright Patterson in Dayton, Ohio. Barbara was a proud military wife who traveled throughout the world with her husband and two children, Corinne Hayes White and Thomas Hayes from their home base at Lajes AFB in the Azores. Major Hayes’s last assignment was Pease Air Force Base in New Hampshire, where Barbara fell in love with the New England people, lobsters, clam chowder, and the Patriots. Barbara was an accomplished artist whose art was displayed at juried shows throughout her travels. After her children graduated from high school, Barbara went on to earn her Bachelor’s Degree in Early Childhood Education and a Master’s of Fine Arts at the University of New Hampshire. She encouraged the arts throughout her life by teaching art and art history to students from kindergarten to college level. She was an avid ballroom dancer, wicked Scrabble player, consummate crossword puzzler, and a glorious southern cook. She lives on in the memory of her children, daughter Corinne Hayes White (Stephen), son Thomas A. Hayes, granddaughters Carrie White, Kelsey Hayes and step-grandsons Shawn and Nicholas Wildes, sons of Deborah Giorgi Hayes. She was blessed with the love of numerous wonderful nieces and nephews. Barbara will join her husband in eternal peace at the New Hampshire State Veteran’s Cemetery at Boscawen, New Hampshire. A celebration of life will take place later this summer. If you wish to donate in her memory you may do so through either Trees in Memory or the Families in Need program at Amedisys Hospice 7 Rockingham Rd. – Suite 200, Windham, NH 03087.

Brentwood - Barbara Oakley Hayes entered heaven&#8217;s ballroom on May 17, 2021 where she will eternally be dancing the Tennessee Waltz. Barbara was born on January 14, 1927 and raised in Oakdale, Tennessee. Barbara left the hills of Tennessee... View Obituary & Service Information

The family of Barbara N. Hayes created this Life Tributes page to make it easy to share your memories.

Send flowers to the Hayes family.