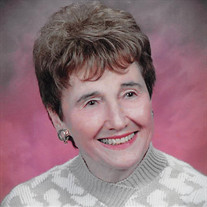 Dover - Barbara (“Barbie”) Turrell Jasper, a resident of the St Ann Rehabilitation and Nursing Center, in Dover, died Sunday morning, December 8,2019 at Wentworth Douglass Hospital, following a massive stroke the prior Wednesday. She is survived by a daughter, Anna, of Somersworth, and a son, Jeremy, and daughter-in-law, Karin, of Exeter. She was predeceased by her daughter, Penelope, in 1966 and her son, Jonathan, in 2009. Barbie was born in Malden, Massachusetts, on August 8, 1926, in circumstances as dramatic as the rest of her life turned out be. Her parents had married against the bride’s family’s wishes. Her mother was the daughter of a New York financier and her father the son of poor factory workers in England. He had received a scholarship to study for the ministry at McGill University, and they met in Canada, while she was on vacation. Barbie’s mother died in childbirth when Barbie was 18 months old, so her father sent her and her older brother—both toddlers--to Birmingham, England, to be raised by his sister and brother-in-law. Barbie’s uncle commuted to his factory job by bicycle each day. She later said the hum of the workers coming home along the main road near their house on their bicycles each evening was loud enough to drown out speech. During World War II, Barbie’s father returned to England to be with his children, and they survived the nightly bombing of Birmingham, spending most nights in a bomb shelter. One night, Barbie and her brother extinguished an incendiary bomb in their backyard. Following secondary school, her brother joined the Birmingham Repertory Theatre Company, but was shortly drafted to join the forces fighting World War II. She followed him into the theatre, attending the Company’s theatre school for two years, and then worked as assistant stage manager and an ingénue player in several small repertory theatre companies in Northern England. At the end of the War, she joined her father—now a naturalized American citizen—when he returned to the United States. She hoped to get into American theatre. She eventually landed a job with a small summer stock company in Quincy, Massachusetts, where she met Alan Jasper, of Milford, New Hampshire. They were married for 44 years, living in Wheeling, West Virginia, New York City, and Lansing, Michigan. In the early days, Alan worked as a radio announcer and would often take Barbie with him when he recorded jazz concerts at various nightclubs live. They went out dancing many nights and did a mean foxtrot. Eventually they settled in Southern New Hampshire and Maine, and had 4 children. Beginning in her 40’s Barbie began following a vigorous fitness regime—including aerobics at least 3 times a week, free weight training, and exercise at home. She was an early advocate of exercise as a way to control her weight and enhance her life. After parting ways with Alan at 63, she lived on her own in Kennebunkport, Maine supporting herself with small jobs and gaining a reputation as an incredibly fit senior, often making friends among the younger women in her fitness classes, who were inspired by her agility, discipline and conviction that exercise provided the path to good self-esteem. At 86, she was still doing 10 full-length push-ups and 50 sit-ups a day, and her fitness enabled her to move easily and freely throughout her life. Visiting hours will be held from 6 to 8 PM on Monday evening, December 16, 2019 in the Remick & Gendron Funeral Home - Crematory, 811 Lafayette Road, Hampton. A Memorial Service will be held on Saturday, December 21st at 12 noon at First Congregational Church, 141 North St., Kennebunkport, ME. Refreshments will be served directly after the ceremony. Burial will be private. In lieu of flowers, the family suggests memorial donations to the Alzheimers Association 225 N. Michigan Ave., Fl. 17, Chicago, IL 60601

The family of Barbara T. Jasper created this Life Tributes page to make it easy to share your memories.

Dover - Barbara (“Barbie”) Turrell Jasper, a resident of the...

Send flowers to the Jasper family.