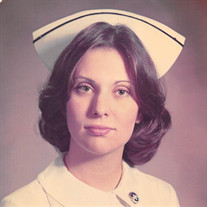 Hampton – Barbara Lee Johns, 66, of Hampton, passed away peacefully on Monday, August 20, 2018 at the Hyder Hospice House in Dover surrounded by her loving and devoted family. Born in Oceanside, NY on October 5, 1951, Barbara was the daughter of the late Allan and Dorothy (Engelbert) Sandmann. She was raised in Stamford, CT and a graduate of Stamford High School with the Class of 1969. She graduated from New Britain General Hospital School of Nursing in 1975. While in school, she met the love of her life, William C. Johns and they were married upon her graduation from nursing school. The young couple resided in Simsbury, CT before relocating to Chicago and Princeton, NJ, as they followed Bill’s career. They returned to Simsbury in 1984 and moved to Hampton in 1987. She had worked as a Registered Nurse for a number of hospitals over the years and retired from the Family Care Center at Exeter Hospital in 2011. Barbara was a selfless lady, always giving to others and asking for nothing in return. She was a true animal lover, volunteering her time with the NH SPCA and the Seacoast Area Feline Education & Rescue (SAFER) Program. Barb was an avid walker and hiker, and completed the Avon walk in Boston with her daughter Kristin and close Hampton friends. She adored her family and time spent with them were the happiest times of her life. She loved traveling with Bill and together they visited many locations in the United States and all over the world. Barbara was a fighter in every sense of the word. After being diagnosed with Non-Hodgkin Lymphoma in late 2017, she never gave up or gave in, trying without complaint, in every way she could to overcome her aggressive illness. The Johns family would like to extend their deepest gratitude for the compassionate care she received at Exeter Hospital, Massachusetts General Hospital, and Hyder Hospice House. In addition to Bill, her beloved husband of over 43 years, Barbara is survived by her daughter, Kristin Johns of Alexandria, VA and her son, Michael Johns and his wife, Lisa, of Virginia Beach, VA., and her beloved cat, Nomar. She also leaves her sisters, Lori Rhodes and her husband Burton, and Lisa Tiger, her in-laws, Tina and Ron Niedbala, Connie and Brad Hebert, and George Johns. She also leaves many nieces and nephews. Family and friends may visit from 4 to 6:45 PM on Thursday, August 30, 2018 in the Remick & Gendron Funeral Home – Crematory, 811 Lafayette Rd., Hampton. A memorial service will be held in the funeral home at 6:45 PM immediately following the visitation. Burial will be private. In lieu of flowers, memorial donations may be made to SAFER at www.safercats.com or the American Society for the Prevention of Cruelty to Animals at www.aspca.org or to a charity of one’s choice.

Hampton &#8211; Barbara Lee Johns, 66, of Hampton, passed away peacefully on Monday, August 20, 2018 at the Hyder Hospice House in Dover surrounded by her loving and devoted family. Born in Oceanside, NY on October 5, 1951, Barbara was the... View Obituary & Service Information

The family of Barbara L. Johns created this Life Tributes page to make it easy to share your memories.

Send flowers to the Johns family.