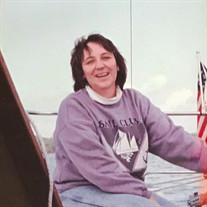 Hampton – Barbara Ann Nerney, 75, of Hampton, NH passed away peacefully on Sunday, April 19, 2020. She was born in Lynn, MA on February 21, 1945, a daughter of the late Charles F. and Virginia M. (Cleary) Baker. Barbara spent her teen years in Peabody, MA where she graduated from Peabody High with the Class of 1962. She completed a post graduate year at Brewster Academy in Wolfeboro. NH before enrolling at Endicott College. Barbara graduated from Endicott in 1965 with her Associate’s Degree in Early Childhood Education. She moved her family to Hampton in the early 1970’s and worked for the NH Division of Health & Human Services into the early 1980s, when she changed careers and became a successful licensed independent insurance agent. Barbara’s primary focus was being with and caring for her children, she was committed to providing them with opportunities in life. Watching them graduate from college and pursuing successful careers of their own filled her with tremendous pride and joy. Later in life her happiest moments were spent with her four grandchildren, teaching them valuable life lessons, telling family stories, loving them with all her heart, and being the best Grammie. She enjoyed every moment spent with them, including time at Hampton beach, on Cape Cod, and up north during February school vacations. Family members include her daughter, Kim Heintzelman and her husband, David of Hampton, her son, Scott R. Nerney and his wife, Ann of Candia, NH and her beloved grandchildren, Makayla V. Heintzelman, Amanda L. Heintzelman, Elizabeth A. Nerney and Matthew R. Nerney. She also leaves her sister, Linda Garrow of East Derry, NH and a niece Gigi Garrow and her family. Services will be at 11 AM on Friday, September 25, 2020 in the Remick & Gendron Funeral Home - Crematory, 811 Lafayette Rd., Hampton. Burial is at 1 PM in the Pine Grove Cemetery, Lynn, MA. Flowers will be accepted, but if desired, memorial donations may be made to American Cancer Society or the New Hampshire SPCA of Stratham.

The family of Barbara A. Nerney created this Life Tributes page to make it easy to share your memories.

Send flowers to the Nerney family.