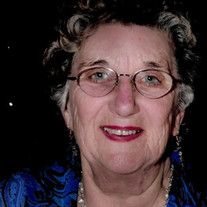 Hampton – Barbara Ann Nicholson, 83, of Hampton, passed away on Saturday October 30, 2021 at Webster at Rye after a courageous battle with hydrocephalus. Barbara’s loving and devoted family was at her bedside. She was born in Philadelphia on February, 7, 1938, the daughter of the late Sheldon and Adelaide (McMullin) Willey. Barbara was raised throughout New England following her father’s career in sales, spending time in Connecticut, Vermont, Maine and New Hampshire The family eventually settled in Hampton and Barbara graduated from Hampton Academy with the Class of 1956. Shortly after graduation, Barbara met her husband Daniel B. Nicholson at Hampton Beach and they married in 1957. The young couple moved to Norfolk, VA where Dan was stationed with the United States Navy. They returned to Hampton in 1958, and Barbara worked for the Hampton Recreation Department leading the summer programming. She was also a school bus driver, teachers’ aid, and substitute teacher while continuing her education, earning her Bachelor of General Studies degree from UNH, graduating Cum Laude. She worked as a kindergarten teacher, inspiring generations of children and parents at Hampton’s Centre and Marston Schools for 30 years and earned her Master of Education degree in Counseling from UNH in 1986. She continued her studies with the Marion Woodman Foundation and completed the BodySoul Rhythms® Leadership Training Program certified to lead workshops and dream groups that she continued well into retirement. And she gained a registered trade name, Barbara’s Dreamtime in 2002. She loved the outdoors, she enjoyed skiing, swimming, and walking the beach, even venturing to boogie board when the waves were right. She and her husband Dan enjoyed sailing on their boat Merryweather, and hiking and camping in the White Mountains. They also enjoyed traveling the country, trips with their grandsons, going to Europe, along with spending time in their retirement home in Zephyrhills, Florida, regulars at the Saturday night dances. Barbara and Dan made friends wherever they went and she gathered people together, family and friends alike whenever possible. Barbara was a member of the Seacoast Education Association (SEA), Vice President of the local National Organization for Women (NOW) chapter, American Association for Counseling and Development, a Lieutenant of the Portsmouth Power Squadron, Hampton Democrats, and Trinity Church Hampton. She is survived by her devoted husband, Daniel B. Nicholson, her two daughters, Beth Searle-Spratt and husband Michael of Hampton and Carol Hansen and husband, David of Bedford, MA and her grandchildren Tyler Searle-Spratt, of Hampton, and Corey Searle-Spratt, and his wife Meaghan McCann of Austin, Texas. She also leaves her two brothers, James Willey and wife Betsy of Stratham, and Thomas Willey and wife Gloria of Fort Meyers, Florida, and nephews Jared, Matthew and Thomas Willey, and niece Cynthia Abdrabou and their families. Visitation will be from 5 to 7 PM on Thursday, November 4, 2021 in the Remick & Gendron Funeral Home – Crematory, 811 Lafayette Rd., Hampton. Services will be held at 11 AM on Friday November 5, 2021 at the Trinity Episcopal Church, 200 High St., Hampton. Burial will follow in the High Street Cemetery, Hampton. Masks are required for all guests at the funeral home and at church. In lieu of flowers, memorial donations may be made to, TASC Transportation Assistance for Seacoast Citizens Meals on Wheels Rockingham Nutrition & Meals On Wheels or The Jane Goodall Institute

Hampton &#8211; Barbara Ann Nicholson, 83, of Hampton, passed away on Saturday October 30, 2021 at Webster at Rye after a courageous battle with hydrocephalus. Barbara&#8217;s loving and devoted family was at her bedside. She was born in Philadelphia... View Obituary & Service Information

The family of Barbara A. Nicholson created this Life Tributes page to make it easy to share your memories.