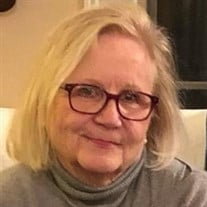 Durham - Barbara Lagassa Tack, 78, of Riverwoods, Durham, died unexpectedly on September 9, 2021. Born in Sheboygan, WI on October 26, 1942 to the late George A. and Dorothy (Zabinski) Lagassa, she is predeceased by her first husband Richard Roach (2020) and her second husband Christiaan Tack (1999). Barbara graduated from high school in Longmeadow, MA and from Lake Erie College, following which she settled in Boston, working initially as a copy editor at Arthur D. Little, a sales associates at Harbor Design, and an English teacher at Littleton High School. As a single woman, she lived variously on Beacon Hill, in Winthrop, and in Allston, MA. After marrying her first husband in 1969 they settled in Houston, TX, where her son Jason was born. The couple separated in 1973. As a determined single mom, Barbara began a successful career as an interior designer with the Herbert Wells Design firm in Houston, where she met her 2nd husband, Christiaan Tack, a diplomat with the Belgian consulate there. They married in 1983 and lived in Houston and then Palos Verdes Estate, CA where they raised her son and shared their enthusiasm for reading, sailing, and windsurfing. The couple moved to Overijse, Belgium before moving to Jakarta, Indonesia, where Christiaan oversaw the programs of the European Patent Office. While living in Jakarta, Barbara edited the newsletter for the local ex-pat community and created Les Idees, her own painted furniture export business, while eagerly undertaking her role as a diplomat’s wife. After several years, the couple moved back to Europe, settling in Starnberg, Germany, within commuting distance of the European Patent Office headquarters in Munich. After Christiaan’s death, Barbara moved to Exeter, NH to be near her family. In New Hampshire, she was employed as a copy editor at Seacoast Media Group until she retired. She moved to Riverwoods at Durham in 2019. Barbara will be remembered for her inquiring mind, her love of poetry, her creativity, her persistence, her talking points, and her strength of character. She was an extremely talented writer who could always characterize life’s joys and tribulations with meaning, profundity, and humor. She was a woman of great style, humor, and adventure and will be sorely missed. She is survived by her son Jason Roach, his wife Aki (Takanezawa), and their daughter Leah of Torrance, CA. She also leaves her beloved brother George Lagassa and his wife Peri of North Hampton, NH and her cherished nieces Phelps and Beach and husband Mike (Silver) and their daughter Carlin. Services will be private. Arrangements are by the Remick & Gendron Funeral Home-Crematory, Hampton.

Durham - Barbara Lagassa Tack, 78, of Riverwoods, Durham, died unexpectedly on September 9, 2021. Born in Sheboygan, WI on October 26, 1942 to the late George A. and Dorothy (Zabinski) Lagassa, she is predeceased by her first husband Richard... View Obituary & Service Information

The family of Barbara Lagassa Tack created this Life Tributes page to make it easy to share your memories.

Send flowers to the Tack family.