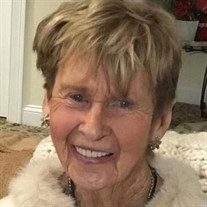 Hampton – Barbara Anne Waterhouse, 87, of Hampton, passed away peacefully on Saturday, November 6, 2021 at Cornerstone at Hampton. Barbara was born on January 20, 1934, in Lawrence, MA, a daughter of the late Daniel and Mary (O’Connor) Sheehan. She shared 56 years of marriage with her late husband, Sam F. Waterhouse, who died in 2012. Barbara was raised in Lawrence and graduated from St. Mary’s High School. She went on to earn her nursing degree from Lawrence General Hospital School of Nursing. Upon her graduation, she went to work as a Registered Nurse at Lawrence General Hospital. She met her beloved Sam at Hampton Beach one summer day; they fell immediately in love and were married in July 1956. The young couple settled in Salem, NH for a brief time before making Hampton their permanent home in the late 1950’s. Family was always her primary focus. She also enjoyed working as a private duty nurse. Barbara and Sam were avid golfers and were members of the Exeter Country Club. They were able to share their passion for golf year-round, in Hampton and in Fort Myers Beach, FL. Family members include her son Jeff Waterhouse and his wife Amy of Hampton; daughters, Cheryl Waterhouse of Boston, MA, Dale Waterhouse and her husband Joseph Pagliaccio of Bayville, NY and Nancy Depuy and her husband Fred of Newtown, CT. She also leaves her grandchildren, Cole and his wife Rica, Wyatt, Harrison and Tucker Depuy of Newtown, Isabel and Julian Pagliaccio of Bayville, Samantha and Zachary Waterhouse of Hampton and Alexandra Waterhouse of Boston. In addition to her husband and her parents, Barbara was predeceased by her brothers, Chip, Daniel, John, Joseph and Robert and her sisters, Helen, Kaye, Mae, Millie and Peggy. A Mass of Christian Burial will be celebrated at 1 PM on Saturday, November 13, 2021 at Our Lady of the Miraculous Medal Church, 289 Lafayette Rd., Hampton. Burial will be private. In lieu of flowers the family suggests donations to the Alzheimer's Association, P.O. Box 96011, Washington, DC 20090-6011. Click Here for Live-Steam of Funeral Mass

The family of Barbara A. Waterhouse created this Life Tributes page to make it easy to share your memories.

Send flowers to the Waterhouse family.