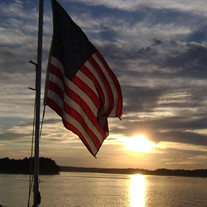 Hampton - Captain Baret V. Ajemian, United States Navy (Ret.), 96, passed away on Wednesday, March 28, 2018 after a brief period of declining health. Baret was born February 19, 1922 in Boston. His parents, Vahan and Acabie (Midinian) Ajemian, both immigrated to the United States from Armenia before they met and married. Baret attended Boston Latin School and MIT before being appointed to the United States Naval Academy, Class of 1944, where he received a degree in mechanical engineering. Graduation was accelerated to allow the Class of 1944 to be deployed to active duty in 1943 to hasten the end of World War II. Immediately upon graduation Baret shipped out to the Pacific theater where he participated in naval actions that helped to secure a victory for the US and its allies. Baret served a total of thirty years active duty, participating in both the Korean and Vietnam conflicts, during which time his duties ranged from Gunnery Officer to Navigator to Executive Officer to Commanding Officer of several Destroyers, including his professed favorite, DD 708 USS Harlan R. Dickson, which he skippered from 1961 to 1963. During his naval career, Baret traveled the world, attended the Naval War College, Senior Course, and taught cadets at West Point. Baret retired from the Navy in 1973. His numerous decorations include the Navy Commendation, a Purple Heart (December 1944, Ormoc Bay, P.I.), American Defense, American Theater, Asiatic-Pacific, WWII Victory, Occupation, China Service, National Defense with Bronze Star, Armed Forces Expeditionary Medal (Cuba), Korean Service Medal, Vietnam Service Medal, United Nations (Korea), Phillipines Liberation, Phillipines Presidential Unit, Korean Presidential Unit. Baret married Shirley Johnson in 1949. They were married for 58 years, before she passed away in 2007. Their son Baret Jr. passed away in 1994. Baret is survived by his daughter Merin and her husband Vic Strawbridge. Their two sons, Benjamin and Samuel Strawbridge, were Baret's pride and joy, and likely the reason he lived to be 96. Baret is also survived by his brother Andre, who was also a career naval officer, and Andre's two sons, Stephen and Norman. “Bud”, the lovable curmudgeon, will also be missed by his lovely companion, Mary Minko. ALL SERVICES WILL BE PRIVATE Go Navy! Beat Army!

The family of Capt. Baret V. Ajemian, USN Ret. created this Life Tributes page to make it easy to share your memories.

Send flowers to the Ajemian family.