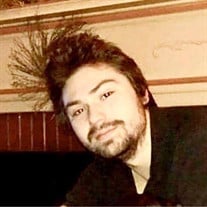 Hampton - Baron Von Parker 25, of Hampton, lost his battle with mental health and substance use disorder on July 30, 2021. “Do not fault me for what I did, love me for what I tried to be.” Born March 4th, 1996, and raised in Hampton, NH. He is a 2014 graduate of Winnacunnet High School and worked at various professions trying to find his path in life. When Baron was up, he was on top of his game. Baron fought his mental illness daily, just to achieve what we take for granted as normal. Baron is survived by his fiercely loving mother and father Roxanne (Donahue-Battle) and Michael Wilson of Hampton, his Mema, Karen (Beoglin) Battle of Amesbury, his Papa Daniel and Mary Battle of Portsmouth, NH and Grandpa Jeffery Donahue of North Andover, MA. His stepsister Aislynn Wilson of Hampton, NH. His aunts and uncles Danielle (Battle) and Barry La Valley of Deering, NH, Timothy Battle of Amesbury, MA, Elizabeth Battle of Portsmouth, NH, Anna Battle and Keith Hornberger of Newmarket, NH. His cousin Logan Smith of Haverhill, MA, and niece Eve Wilson of Springvale, ME., who grew up as siblings. Younger cousins Barry, Ryker, Stella and great niece Juniper. Baron is preceded in death by his great-grandmothers Mary Beoglin, Madeline Donahue, Dorothy Battle and his black labs Reilly and Ziggy and cat Parker. “I vividly remember the sound of our feet slapping against the cement staircase to the water slide on the strip on Hampton Beach as we ran as fast as we could to the top. Climbing rocks on the beach as sand whipped against our faces. I feel so lucky to have so many memories with Baron. I remember how exhilarated he was to ride on the back of the motorcycle and how jealous I was that my mom said I wasn’t old enough yet. He was so excited when they moved to Glen Hill and in the summer we would ride bikes all around the neighborhood and shout nonsense kid things at each other and crack up. Baron found humor in the smallest things, and keeping on a serious face with him was a near impossible feat. We held onto hope for him for so long, but he always struggled to find his peace. He has that now, and though we are heartbroken and devastated from losing him, he would want us to celebrate him and love him for the bold, sweet, caring, protective, humorous, well-dressed dude that he always was. To Baron, I’ll hold my memories of you close to my heart and keep every detail treasured. You’ll be so missed. Give Parker, Ziggy and Riley a scratch for us.” ~Eve Dumont-Wilson Private services will be held for the family and a celebration of Baron’s life will be held at a later date.

The family of Baron Von Parker created this Life Tributes page to make it easy to share your memories.

Hampton - Baron Von Parker 25, of Hampton, lost his battle with...

Send flowers to the Parker family.