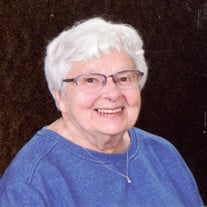 North Hampton - Betty Jean (McDade) Elliot, 92, wife of Wayne I. Elliot, passed away at her North Hampton home with her family by her side on September 7th, 2020, just three days short of her and Wayne’s September 10th, 70th wedding anniversary. Betty was born in Medford, Massachusetts on September 4th, 1928 to William S. and Sybella (Cameron) McDade. She graduated from Medford High School with the class of 1946 and moved with her family to Hampton, New Hampshire in 1948. She and Wayne remained in Hampton after their marriage in 1950, before moving to the home they built in North Hampton, where they have resided since. In her younger years, she worked for the Polaroid Corporation in Cambridge, MA, Jordan Marsh in Boston, and Enterprise Corporation in Malden, MA. While Wayne served in the Marines, Betty worked at the Midway Restaurant in New Bern, NC. Back in NH, she was a driver for the SAD 21 Instructional Materials Center and was part owner of the Elliot Insurance Agency. After raising her family, she decided to return to the work force and enjoyed 10 years of service in the various admitting departments of Exeter Hospital. She then returned after retirement as the short term stay unit coordinator at the hospital for another 5 years. Betty was active for many years with various youth organizations, including 4H, the Girl Scouts, the Cub and Boy Scouts, the North Hampton Youth Association, and various North Hampton Elementary and Winnacunnet High School boosters' groups. She served as area chairman many times for the annual cancer, Red Cross, March of Dimes and Heart Fund drives. An active member of the Hampton United Methodist Church for over 50 years, she served her church as a Sunday school teacher, a member of the church and bell choirs, and on various other boards and committees. Betty and Wayne were proud members of the 234 Club, having visited all 234 towns and cities in New Hampshire. She was an avid quilter and member of the Threads That Bind quilting group as well as a wonderful cook and an avid reader. She loved the outdoors, especially spending time in her many perennial gardens. Her family has many memories of their time spent with them in Wolfeboro, Tuftonboro, and on Lake Winnipesaukee, where she swam, hiked and canoed. One of her favorite pastimes was watching the birds with her husband from their kitchen window. Betty leaves Wayne, her husband of nearly 70 years, of North Hampton, her children, Teresa J. (Elliot) Rezendes of Exeter, Richard W. and Kathleen Elliot of Hampton and David W. and Rachel Elliot of Northwood. She also so loved her grandchildren, Todd Dunphy, Jennifer Dunphy, Michael Rezendes, Timothy Rezendes, Zachery Elliot and Alexandra Elliot, and her great-grandchildren Ryan John Scribner, Zachary Scribner, Tyler Scribner, Allison Fitzpatrick, Owen Dunphy, Cameron Dunphy, Marley Rezendes and Piper Rezendes. She is survived by her sisters-in-law Mrs. Richard (June Elliot) Chevalier and Mrs. Larry (Holly Elliot) Knowles, and many nieces and nephews. In addition to her parents, she was pre-deceased by her in-laws, William and Alzena Elliot, her brother, William McDade, and her son-in-law Richard E. Rezendes. The family would like to extend its grateful appreciation to Beacon Hospice and all the people of that organization who cared for and loved Betty for the past several months. In lieu of flowers, donations may be made to Winnacunnet Dollars for Scholars, PO Box 1593, North Hampton, NH, 03862 and please note Wayne I. Elliot Scholarship on your check memo line or to the Children's Dyslexia Centers, Inc., either the Nashua Center, 200 Main Street, Nashua, NH 03060 or the Seacoast Center, 33 Hanson Street, Rochester, H 03867. There will be a graveside service for family on Saturday, September 12th at 11 am at the High Street Cemetery in Hampton.

North Hampton - Betty Jean (McDade) Elliot, 92, wife of Wayne I. Elliot, passed away at her North Hampton home with her family by her side on September 7th, 2020, just three days short of her and Wayne&#8217;s September 10th, 70th wedding anniversary. Betty... View Obituary & Service Information

The family of Betty J. Elliot created this Life Tributes page to make it easy to share your memories.

Send flowers to the Elliot family.