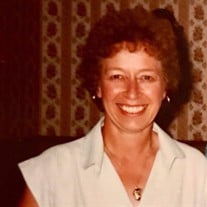 Betty Eleanor (Wohler) (Yeaw) Hedison passed away on May 23, 2018 after a period of declining health. Betty was born on October 19, 1934 in Greenfield MA to John C. and Ruth (Kemp) Wohler. She attended Greenfield schools and St. Paul’s Lutheran Church until she moved to Guilford VT. Betty graduated as Valedictorian from Brattleboro High School in 1952, where she received honors in French and Latin and the D.A.R. Citizenship award. After high school, Betty was selected as a community ambassador for the Experiment in International Living. She lived with a family in Copenhagen and traveled throughout post-war Europe. Back home, she began work in insurance in Brattleboro. In 1953 she was appointed Executive Secretary of the Vermont Association of Insurance Agents. Betty married Arthur “Bud” Yeaw in 1954 and moved to Poultney VT. She was active in the Methodist Church and Eastern Star, where she rose to Grand Matron. Bud’s State Police career brought moves to Northfield Falls, VT and then East Montpelier, VT, where she was involved in many school activities, as a Cub Scout Den Mother, and served in many roles in the Old Brick Church. Betty returned to work after the family moved to Derby VT, where again she worked in insurance, supported a bilingual project, and in community mental health services. She served in many capacities in the American Legion Auxiliary. Betty and Bud were active supporters of North Country Union High School sports teams. After Bud’s untimely death in 1983, Betty eventually settled in Hampton, NH and returned to work in insurance before her retirement. She married Kazar (Larry) Hedison in 1989. They enjoyed the outdoors and traveling before his death in 1995. Betty continued to travel extensively around the U.S., to Africa on safari, and to visit her friends in the U.K. In 2010, Betty moved to Riverwoods Continuing Care Community in Exeter, NH, once again making many special friends in a new place. Later in life, Betty became an avid fan of Boston sports teams. She watched most Red Sox and Patriots games with Tigger, her Maine Coon cat, on her lap and updated a scoreboard daily for her neighbors. She made lifelong friends wherever she lived, a testimony to her curiosity, caring, and generosity of spirit. Betty is predeceased by her parents and brothers, John and William Wohler, her husbands, sisters- and brothers-in law, her son-in-law, Gary Marsella, and granddaughter Rebecca Marsella. She is survived by her children, Jeffrey Yeaw and his wife Liz of Williamsburg, VA, Deborah Yeaw Marsella of Dracut, MA, Glenn Yeaw and his wife Dr. Silke Bernert of Cincinnati, OH, and her step-sons Bruce Hedison and David Hedison, both of Boston, MA. She is also survived by her sister, Sylvia Roobian and her sons Michael and Douglas Roobian, of Hampton, NH and her sister-in-law Arlene Blum of Guilford, VT. She is also survived by her grandchildren, Jennifer Yeaw of New York City, Jacqueline Todd of Walpole, MA, and Sarah Buc of Washington, DC and their spouses, and Justine Marsella of Dracut, MA, three great grandchildren and many nieces and nephews. Graveside services will be held at 11 AM on Saturday, June 9, 2018 in the Baker Cemetery, Sweet Pond Rd., Guilford, VT. A Celebration of Life will be held at 2 PM on Sunday, June 10 in the Great Bay Room at Riverwoods Exeter, 7 Riverwoods Dr., Exeter, NH 03833. If desired, contributions can be made to the National Law Enforcement Memorial Fund or the Jimmy Fund.

Betty Eleanor (Wohler) (Yeaw) Hedison passed away on May 23, 2018 after a period of declining health. Betty was born on October 19, 1934 in Greenfield MA to John C. and Ruth (Kemp) Wohler. She attended Greenfield schools and St. Paul&#8217;s... View Obituary & Service Information

The family of Betty Hedison created this Life Tributes page to make it easy to share your memories.

Send flowers to the Hedison family.