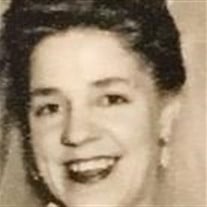 Portsmouth – Betty May Lightner, 86, of Portsmouth, died peacefully, January 4, 2017 at Portsmouth Regional Hospital. She was born in Kings Lynn, England, March 4, 1930 the daughter of the late Walter and Elizabeth (Potts) Mace. Raised in England she attended schools there and met the love of her life, Alvin L. “Bill” Lightner, Sr. in 1953 at a ballroom during his service time with the US Air Force in England. They married in 1955 and shared 60 years of marriage until he predeceased her in 2015. Betty moved to the US in 1958. During Bill’s career the family followed Bill to many destinations overseas and throughout the United States. Betty was a devoted and loving wife, mother, and grandmother, and will always be loved and missed by her family. She was a member of Christ Episcopal Church of Portsmouth, enjoyed antiquing, travel, cooking, knitting, reading, crafts, music, playing the piano and the family dog Maxie. Family members include her children, Tena Lightner Wolf of Greenland, Alvin L. Lightner, Jr. of Rollinsford; Cindy Lightner Taylor of Portsmouth; grandchildren, Alvin L. Lightner, III, Samuel and Sophie Lightner, Sarah Wolf, Elizabeth Lightner and Erica Lightner Taylor, her brother, Kenneth Mace from England, nephews Domonic and Simon Mace, niece Alison Mace and cousins, Carol Edwards and Robin Mace. A visiting hour will be held from 10 to 11 AM Saturday, January 14, 2017 at Christ Episcopal Church, 1035 Lafayette Road, Portsmouth. A service will immediately follow at 11 AM in the church. Inurnment will be in the Christ Episcopal Church Memorial Garden in the spring. Relatives and friends are respectfully invited. Arrangements are by the Remick & Gendron Funeral Home-Crematory, Hampton.

The family of Betty May Lightner created this Life Tributes page to make it easy to share your memories.

Send flowers to the Lightner family.