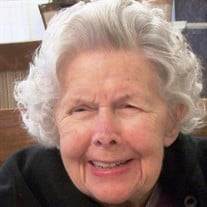 Hampton Falls - Gracious always, and generous in her concern for others to the end, our mother, grandmother and great-grandmother, Beverly Swain Powell Woodward, died on Saturday, June 3, 2017, within weeks of her 99th birthday. Beverly... View Obituary & Service Information

The family of Beverly Powell Woodward created this Life Tributes page to make it easy to share your memories.

Hampton Falls - Gracious always, and generous in her concern...

Send flowers to the Woodward family.