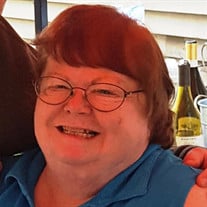 Newmarket – Bonnie N. Hightower, 67, of Newmarket and a former longtime resident of Hampton, passed away peacefully on Monday, August 26, 2019 at the Portsmouth Hospital after a brief illness. Bonnie was born in Exeter on August 24, 1952, a daughter of the late Frank and Allaire (Blake) Nownes and was the wife of the late Leon Hightower who died in 2000. Bonnie was raised in Hampton and graduated from Winnacunnet High with the Class of 1970. She completed beauty school and worked as a stylist for a brief time before meeting and falling in love with Leon Hightower, a young sailor stationed at the Portsmouth Naval Shipyard. Bonnie and Leon had lived in Virginia and Sardinia and moved to Portsmouth in the late 1990s when Leon retired from the service. She loved her job with Area Home Care & Family Services of Portsmouth and especially enjoyed spending time with her many clients and their families. Bonnie was quite artistic and hand-made many arts & crafts projects for her family and friends and also sold her creations at local craft fairs. She enjoyed doing genealogy, collecting dolls and angel figurines, and she particularly enjoyed going on long drives, with Vermont being one of her favorite destinations. She is survived by her siblings, Jennifer Duclos and her husband Aimé of South Berwick, ME, Jinny Sawyer and her husband, Michael of Concord and Roger F. Nownes and his fiancée Jacqueline Gentile of Salem. She also leaves her nephews, Ryan Downes, Colby Downes and Bryan Duclos, nieces Forest Nownes, Lisa Flynn, her great nieces Makenzie Pettis, Brooke Flynn and great nephew Jack Flynn. In addition to her parents and husband, Bonnie was predeceased by her brother, Harry Nownes who passed in 2017. Visiting hours will be from 5 to 7 PM on Wednesday, September 4, 2019 in the Remick & Gendron Funeral Home-Crematory, 811 Lafayette Road, Hampton. Burial will be private. In lieu of flowers, memorial donations may be made to New Hampshire SPCA PO Box 196, Stratham, NH 03885.

Newmarket &#8211; Bonnie N. Hightower, 67, of Newmarket and a former longtime resident of Hampton, passed away peacefully on Monday, August 26, 2019 at the Portsmouth Hospital after a brief illness. Bonnie was born in Exeter on August 24, 1952,... View Obituary & Service Information

The family of Bonnie N. Hightower created this Life Tributes page to make it easy to share your memories.

Newmarket – Bonnie N. Hightower, 67, of Newmarket and a former...

Send flowers to the Hightower family.