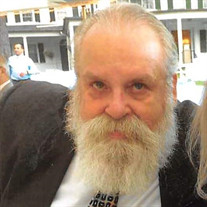 Hampton Falls, NH - Bradley A. Upton, Jr., 63, of Hampton Falls and a former longtime resident of Lynn, MA, passed away peacefully on Thursday, June 6, 2019 at Brigham and Women’s Hospital in Boston surrounded by those he loved. Brad was born in Lynn, MA on September 27, 1955, a son of Jacqueline (Connery) O’Brien of California and the late Bradley Upton, Sr. Bradley was raised in Lynn, MA and graduated from high school in California. Upon graduation, Brad enlisted in the United States Army and honorably served his country as a Green Beret with the 10th Special Forces Group (Airborne). While in the Army, Brad met and married the true love of his life, Pamela (Drivas) Upton. After his discharge, Brad and Pam settled in Lynn, MA to raise their family. Brad worked for the Essex County Sherriff’s Department where he led the Tactical and Apprehension Teams along with his many other accomplishments. He retired in 2007 with more than 26 years with the department. Brad had a great sense of humor, enjoyed reading, was a huge NE Patriots fan and loved to cook for his family and many friends. Above all else, Brad was devoted to his family. He and Pam were inseparable for over 43 years and times with family were the happiest times of his life. He is survived by his beloved wife Pam and his loving daughter, Amy Upton of Hampton Falls and his devoted son, Jonathan Upton and his fiancée Nicole Parmenter, of Cranston, RI. He also leaves his nephew, Joshua Drivas of Saugus, MA, whom he treated as a son, his brothers, Michael O’Brien and Glen and Todd Upton, his sister Beth Upton, and many nieces, nephews and cousins. He was predeceased by his brother Matthew Upton and his very special grandmother, Elizabeth “Nana” Cucurullo, who had devoted much of her time into raising Bradley. Visiting hours will be from 4 to 8 PM on Friday, June 14, 2019 in the Remick & Gendron Funeral Home – Crematory, 811 Lafayette Rd., Hampton, NH 03842. Services will be held on Saturday at 11 AM in the funeral home. Burial will be in Oaklawn Cemetery, Hampton Falls. If desired memorial donations may be made to the Dana Farber Cancer Institute

Hampton Falls, NH - Bradley A. Upton, Jr., 63, of Hampton Falls and a former longtime resident of Lynn, MA, passed away peacefully on Thursday, June 6, 2019 at Brigham and Women&#8217;s Hospital in Boston surrounded by those he loved. Brad was... View Obituary & Service Information

The family of Bradley A. Upton Jr. created this Life Tributes page to make it easy to share your memories.

Send flowers to the Upton family.