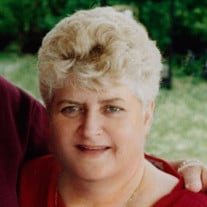 Seabrook – Brenda J. (Colby) Anderson, 76, of Seabrook, formerly of Newburyport, Mass., died peacefully Monday, May 15, 2017, at her home embraced by the love of her family. She was born January 23, 1941 in Newburyport, a daughter of the late Arthur M. and Margaret E. (Teague) Colby. She graduated from Newburyport High School with the Class of 1958. Brenda was employed as a bookkeeper for A.M. - P.M. Janitorial Service Inc., a family business that she began with her husband in 1970. She was a member of the Amesbury Congregation of Jehovah’s Witnesses in Newburyport, Mass. Brenda dedicated her life to Jehovah God on January 3, 1970; from that day forward her faith became the absolute center from which her life’s expression flowed. She found joy sharing the bible’s transformative message of God’s love for humanity and His promise for mankind. She was the beloved wife of Laurance “Andy” Anderson, Sr. of Seabrook, whom she shared 59 years of marriage, and her home for the last 32 years, coming from South Hampton. She was a devoted mother to her children, grandchildren and great-grandchildren. In addition to her husband, family members include six children: Laurance Anderson, Jr. and his wife Karen of Hampton Falls, Jeffrey Anderson and his wife Cheryl of Seabrook, Kimberely DePiero of Amesbury, Mass., Mark Anderson and his wife Ellen of Wrentham, Mass., Douglas Anderson and his wife Michelle of Seabrook and William Anderson and his wife Donna of Hampton Falls, twelve grandchildren and seven great grandchildren, her sister, Donna Maestas and her husband Paul of Broomfield, CO, her brother, William Colby and his wife Joyce of Newburyport and many nieces and nephews. She was predeceased by her brother, Arthur Colby, Jr. Visiting hours will be held 12:30 – 2:00 p.m. on Saturday, May 27 at the Amesbury Congregation of Jehovah’s Witnesses, 179 Storey Ave., Newburyport, MA 01950. A memorial service will immediately follow at 2:00 p.m. at the same location. Memorial donations may be made to the Amesbury Congregation of Jehovah’s Witnesses, 179 Storey Avenue, Newburyport, MA 01950.

The family of Brenda J. Anderson created this Life Tributes page to make it easy to share your memories.