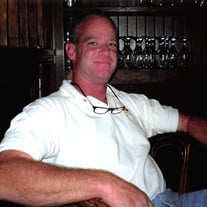 Hampton – Brett Louis Bufalino, 57, of Hampton, passed away on Wednesday, December 28, 2016 at the Exeter Hospital after a brief illness. Brett was born on May 26, 1959 in Manchester, MA, the son of the late Louis C. and Barbara Bufalino. He spent his early childhood in Manchester, MA. Brett attended Eaglebrook School in Deerfield, MA, and graduated from Westminster School in Simsbury, Ct., where he excelled in athletics, starring in football. He went on to attend the University of Massachusetts and University of New Hampshire. Brett had worked in property management for many years and founded his own company, ProActive Property Management of Hampton, which he ran until the time of his death. Brett was a great cook and worked for his father at the Flagstones Restaurant in Newington for a number of years. A humble, generous man with varied interests, Brett loved kids and animals and even held his private pilot’s license. He carried trays of animal treats in his work vehicle and became very popular with all the dogs and cats on his work route. He was also an active volunteer with the Seacoast Area Feline Education & Rescue (SAFER) Program. He is survived by his stepmother, Dinah Bufalino of Topsfield, MA, his sister Catharine Bufalino of New York City, his nephew Rafael and his many cousins. Brett also leaves his devoted and very much loved companion, Carol Duquette of Hampton, his cats, Bozzy and Marvin, and many dear friends, too numerous to list. Friends may visit from 6 to 7 pm on Wednesday, January 11, 2016 in the Remick & Gendron Funeral Home-Crematory, 811 Lafayette Rd., Hampton. Services will be held in the funeral home at 7 pm following the visitation. Burial will be private. In lieu of flowers, donations may be mailed to SAFER, PO Box 1531, Hampton, NH 03843 or made online at http://www.safercats.com/donate.

Hampton &#8211; Brett Louis Bufalino, 57, of Hampton, passed away on Wednesday, December 28, 2016 at the Exeter Hospital after a brief illness. Brett was born on May 26, 1959 in Manchester, MA, the son of the late Louis C. and Barbara Bufalino.... View Obituary & Service Information

The family of Brett L. Bufalino created this Life Tributes page to make it easy to share your memories.

Hampton – Brett Louis Bufalino, 57, of Hampton, passed away on...

Send flowers to the Bufalino family.