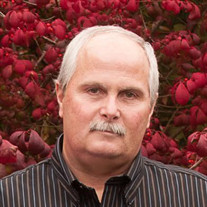 Seabrook – Brett D. Sullivan, 56, of Seabrook, died Tuesday, February 15, 2017 at Exeter Hospital after a long battle with pulmonary fibrosis. He was born in Newburyport, Mass., February 19, 1960. Brett was the son of William H. “Skip” and Charlotte R. (Janvrin) Sullivan of Hampton. He graduated from Winnacunnet High School with the Class of 1978 and enlisted in the US Navy. He served four years in the Seabee’s with Construction Battalion 133 and was stationed at Diego Garcia during the Iranian Hostage Crisis. Brett was employed as an auto body mechanic owning and operating Brett’s Auto Body in Seabrook for over 30 years. He was a member of the Rand Memorial Church in Seabrook and enjoyed collecting coins and jackknives. In addition to his parents, he leaves his wife, Roberta L. (Felch) Sullivan with whom he shared 21 years of marriage. He also leaves three stepchildren, Michael Felch and his wife Jessica of Pittsfield, Frederick Stoddard of Plainfield, CT, Kristy Ellsworth and her husband John of Derry, his brother, Steven Sullivan and his wife Tammy of Portsmouth, two sisters, Sheryl Sullivan of Seabrook, Kimberly Martin and her husband Robert of Epping, two grandchildren, Sean and Caleb, three nephews, three nieces, several aunts, uncles and cousins. Visiting hours will be from 2-5 P.M. Sunday, February 19, 2017 at the Remick & Gendron Funeral Home-Crematory, 811 Lafayette Road, Hampton followed by a brief prayer service at 5 P.M. concluding with military honors. Relatives and friends are respectfully invited. Family flowers only. Donations may be made to the Rand Memorial Church, 134 South Main Street, Seabrook, NH 03874.

The family of Brett D. Sullivan created this Life Tributes page to make it easy to share your memories.