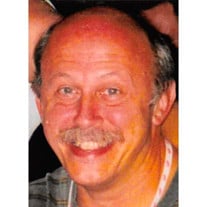 North Hampton – Brian Wesley Ashford, 68, of North Hampton, passed away on Wednesday, January 22, 2020 after a courageous battle with brain cancer. His sense of adventure, great humor and evocative conversation will be missed dearly and we will remember him as having one of the kindest souls that we have ever met. He was born in Portsmouth on August 22, 1951, son of the late Bertram and Mabel (Carter) Ashford. Brian was raised in Portsmouth and graduated from Portsmouth High Class of 1969. He graduated from NH Technical Institute and later earned a Bachelor’s Degree in Computer Science from UNH in 1983. During his career Brian worked as a computer programmer with Data General of Portsmouth, Tektronix in Portland, Oregon, and White Pine Software of Nashua. In 2009 he was recruited to Silicon Valley by Blue Jeans Network. Through his work he traveled throughout Europe, the Middle East and Japan. He lived in Alaska, San Francisco, and in the San Diego area before returning to NH in 2018. He was then fortunate to return to his profession and work with former colleagues at Avaya, Inc. until his last surgery. Brian loved spending time with his friends and family, time at the family camp on Great East Lake, movies, and hiking. Music was his passion and he loved bluegrass and playing the guitar with friends. He was a founding partner of Acoustic Outfitters Music Shop (1996-2010) in Stratham. He is survived by his sister, Brenda Newton of North Hampton; nieces, Kimberly Newton, MD and her husband, Drew and Heidi Farrow and her husband, Brett; three grand-nieces, one grand-nephew and many cousins. In addition to his parents, he was predeceased by his brothers, Wayne and William Ashford. Family and friends are invited to a celebration of Brian’s life on Saturday, February 22nd in the Remick & Gendron Funeral Home - Crematory, 811 Lafayette Rd., Hampton. Visitation from 1 to 2 pm. Service at 2:00 pm. Burial will follow in the Center Cemetery, North Hampton. In lieu of traditional remembrances donations may be made to Dana Farber Cancer Institute

North Hampton &#8211; Brian Wesley Ashford, 68, of North Hampton, passed away on Wednesday, January 22, 2020 after a courageous battle with brain cancer. His sense of adventure, great humor and evocative conversation will be missed dearly and... View Obituary & Service Information

The family of Brian W. Ashford created this Life Tributes page to make it easy to share your memories.

Send flowers to the Ashford family.