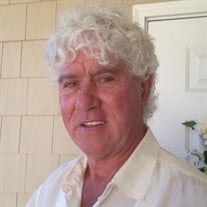 Hampton – Bruce A. Burnham, 75, of Hampton and formerly of Lawrence, MA, passed away suddenly at his home on Friday, May 15, 2020. Bruce was born September 15, 1944 in Lawrence, MA, a son of the late Lena M. Torromeo and Richard Burnham. He shared over 30 years of marriage with his beloved wife and best friend, Christine (Costello) Burnham of Hampton. Bruce was loved by a wide circle of family and friends, and was known to everyone as a magnanimous, kind-hearted person. He went out of his way to help strangers and loved-ones throughout his life and had a unique way of making everyone that he met feel special. Since fulfilling his dream of moving to the beach, he was happiest socializing with old and new friends. Bruce was raised in Lawrence and graduated from Lawrence High with the Class of 1962. He raised his family in Andover, MA and worked for his uncle in the construction business for a few years. He then worked as a route salesman for Best Foods of Totowa, NJ until his retirement in 2001. He and Christine were married in 1989 and the couple settled in Windham, NH. They then relocated to Hampton from Windham in 2011. Bruce never wanted to stop working. His dream retirement job of owning and operating a hot dog business came true when he opened Jose Hot Dog in Pelham, NH, which he ran for over six years. Since then, Bruce has worked as a Rockingham County Bailiff and held several semi-retirement jobs, most recently as a driver for Hampton Ford. In addition to his wife Christine, Bruce is survived by his daughters, Lori Burnham of Salem, NH and Amy Theriault and her husband Eric of Scituate, MA; his step-daughter Hilary Glynn of Newton, MA and his step-son, Michael Wald and his wife Miho of Long Valley, NJ. He also leaves his ten grandchildren: Peter, Jr. and Alexis LeFebre; Mason, Katelin and Kelly Theriault; Ryan, Connor, and Christina Glynn and Hana and Eri Wald. Bruce is also survived by his nephew, Michael Burnham, and his niece, Tricia Burnham Lindquist. He was predeceased by his brother, Michael F. Burnham. A Mass of Christian Burial will be celebrated at 10 AM on Saturday, May 15, 2021 at Our Lady of the Miraculous Medal Church, 289 Lafayette Rd., Hampton. Burial will follow in the High Street Cemetery, Hampton. Masks are mandatory and social distancing must be maintained. The Mass will be livestreamed at www.olmmparish.org. In lieu of flowers, the family suggests donations to the New Hampshire Food Bank or the Boys & Girls Club of Lawrence, MA.

The family of Bruce A. Burnham created this Life Tributes page to make it easy to share your memories.

Hampton – Bruce A. Burnham, 75, of Hampton and formerly of Lawrence,...

Send flowers to the Burnham family.