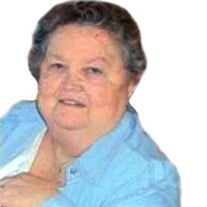 Seabrook – Caddie L. Carter, 84, of Seabrook, died Wednesday, August 2, 2017 at her home surrounded by her loving family. She was born July 18, 1933 in Portsmouth the daughter of the late Ralph and Ailene (Gynan) Marshall. Caddie graduated from Amesbury, Mass., High School and attended the University of New Hampshire. She was employed as a postal clerk at the Seabrook Post Office for many years retiring in 1991. A lifelong resident of Seabrook she was a member of the Rand Memorial Church, was a former member of the former Tide Mill Chapter #67 O.E.S. and a member of American Legion Post 70 Women’s Auxiliary. She loved traveling with her sister-in-law, Priscilla Marshall and her nieces. She also enjoyed playing Canasta with her many internet friends. She was the wife of the late Oliver L. Carter who predeceased her in 2014. Family members include two sons, Oliver L. Carter, Jr. and his wife Shelly, Forrest E. Carter and his wife Joyce all of Seabrook, ten grandchildren, nine great grandchildren, nieces and nephews. She was also predeceased by four brothers, Ralph Marshall, Jr., Byron, Forrest and John Marshall. Visiting hours will be from 6-8 P.M. Friday, August 4, 2017 at the Remick & Gendron Funeral Home-Crematory, 811 Lafayette Road, Hampton. Services will be held at 11 A.M. Saturday, August 5, 2017 at the Rand Memorial Church, 134 South Main Street, Seabrook. Burial will be in the Wildwood Cemetery, Seabrook. In lieu of flowers, donations may be made to the Amedisys Foundation, c/o Beacon Hospice, 25 New Hampshire Ave. STE 272, Portsmouth, NH 03801.

Seabrook &#8211; Caddie L. Carter, 84, of Seabrook, died Wednesday, August 2, 2017 at her home surrounded by her loving family. She was born July 18, 1933 in Portsmouth the daughter of the late Ralph and Ailene (Gynan) Marshall. Caddie graduated... View Obituary & Service Information

The family of Caddie L Carter created this Life Tributes page to make it easy to share your memories.