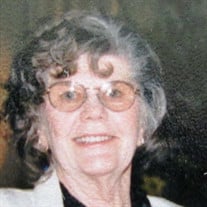 Seabrook – Carol A. Richard, 83, of Seabrook, died peacefully on Wednesday, January 31, 2018 at Oceanside Skilled Nursing & Rehab in Hampton. She was born in Lynn, MA on June 3, 1934 a daughter of the late Frederick E. and Winifred (Mackenzie) Mundy. She was a Greeter at the local Walmart in Seabrook for over 15 years. She enjoyed her position very much and loved to share stories of the people she became friendly with over the years. Before working at Wal-Mart, she was employed at the Seabrook Dog track. . Carol was an avid gardener and enjoyed decorating her home with beautiful flowers. She was a kind and generous person to all who needed a helping hand. She always had a stray animal or two hanging around her house, which she adopted and gave a home. She opened her home to all who needed a place to stay. She was the wife of the late Henry F. Richard who died in 1985. Family members include her children, Joanne Brown and her husband Donald of Derry, Henry A. Richard Sr. and his wife Kathleen of South Hampton and William Richard and his wife Kerry of Amesbury, MA; siblings, Marilyn W. Walton and her husband Jim of Salisbury, MA, William J. Mundy of Lynn, MA and Arletta Barry of San Jose, CA; grandchildren, Matthew Dodge, Juliet, Henry Jr., Michael, Samantha, Derek, Craig, Mackenzie and Nicole Richard; great grandchildren, Randy, Maddox, Hanna, Michael, Henry III, Adeline and several nieces, nephews and many good friends. In addition to her parents and husband, she was predeceased by her children, Frederick Richard and Darlynne Richard; sister, Jacqueline A. Folan; sister in law, Ellen Mundy and brother in law, Robert Barry. The family would like to thank Maggie Burke for all the care and attention to Carol in her time of need. At Carol’s request all services will be private. In lieu of flowers, donations may be made to your local animal shelter or the American Society for the Prevention of Cruelty to Animals (ASPCA), 424 E. 92nd Street, New York, NY 10128-6804.

Seabrook &#8211; Carol A. Richard, 83, of Seabrook, died peacefully on Wednesday, January 31, 2018 at Oceanside Skilled Nursing & Rehab in Hampton. She was born in Lynn, MA on June 3, 1934 a daughter of the late Frederick E. and Winifred... View Obituary & Service Information

The family of Carol Ann Richard created this Life Tributes page to make it easy to share your memories.

Send flowers to the Richard family.