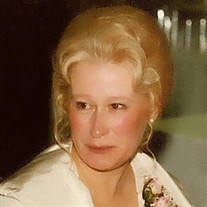 Rye - Carol Ann (Spencer) Tilton, 81, passed away peacefully on Feb. 9, 2018 at the Edgewood Centre in Portsmouth, following a lengthy battle with Parkinson’s disease. Her loving family was by her side. She was born June 28, 1936 in Cleveland, TN, a daughter of the late Edith Marie and Elwood “Spence” Spencer. Her family eventually settled on Martha’s Vineyard where Carol grew up. An appreciation of the arts from an early age led her to become an accomplished dancer and poet. She graduated as Valedictorian, Class of 1954 at the Tisbury School and married her high school sweetheart, David Tilton of Chilmark. After the birth of their first child, the family moved to Roseville, MN where they raised five children and started a successful power equipment import and distribution business. As the company grew, the family relocated to Rye in 1971 to establish a foothold in the northeast. From the inception of the business, Carol worked tirelessly to help ensure its success. Her dedication and work ethic were extraordinary and she, with her husband, strove to build a business that was reputable, ethical and prosperous for more than four decades. Carol, a breast cancer survivor, was a fiercely devoted Mother, Wife, Grandmother and Great Grandmother. She will be remembered for her grace, humility and generosity. A selfless and caring person, she always put others first. Although she lived a quiet life, many were touched by her kindness. She is survived by her husband of 64 years, David Tilton of Rye; children, David Tilton Jr. and wife Kimberly of Newmarket, Desiree Tilton of Dover, Daniel Tilton and wife LuEllen of Strafford, Deidre Sanborn of Hampden, ME and Dawn Tarmey and husband John “Beany” of Galavants Ferry, SC; grandchildren, Tyler Buchanan, Meghan Tarmey, Camille (Tilton) Sims, David Tilton III, Bryan Buchanan, Benjamin Tilton, Kendra (Tilton) Murphy, Rachel Buchanan, Carrie Tilton, Zebulon Sanborn, Jason Tarmey, John Tarmey; Great Grandchildren, Jason Tarmey Jr., Declan, Isla and Eamon Sims and Owen Buchanan and son-in-law Craig Sanborn of Old Town, ME. In addition to her parents, she was predeceased by her sister Sylvan Spencer of Evanston, IL, The family would like to thank The Edgewood Centre and especially the wonderful caregivers who treated Carol with great kindness and respect. Visitation will be held from 11 AM to 12 noon on Thursday, February, 15, 2018 in the Remick & Gendron Funeral Home-Crematory, 811 Lafayette Road, Hampton, NH. A Celebration of Life will immediately follow at 12 noon in the funeral home. A private family burial will take place in Chilmark, MA at a later date. In lieu of flowers, the family suggests a donation to the Michael J Fox Foundation for Parkinsons Research Grand Central Station, P.O. Box 4777, New York, NY 10163-4777.

Rye - Carol Ann (Spencer) Tilton, 81, passed away peacefully on Feb. 9, 2018 at the Edgewood Centre in Portsmouth, following a lengthy battle with Parkinson&#8217;s disease. Her loving family was by her side. She was born June 28, 1936 in... View Obituary & Service Information

The family of Carol Ann Tilton created this Life Tributes page to make it easy to share your memories.

Send flowers to the Tilton family.